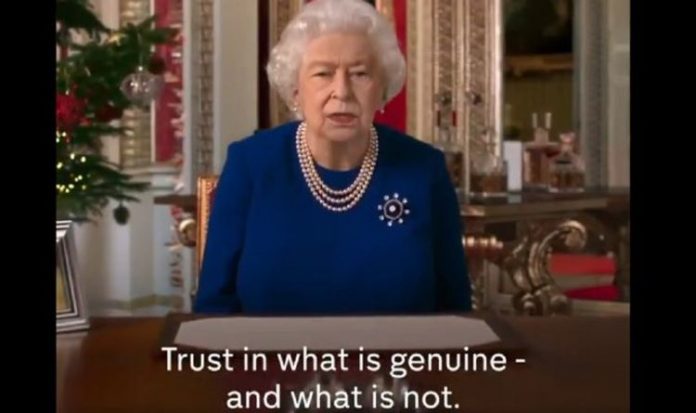 The station had made use of video effects software to recreate the British monarch delivering her traditional festive message. However, the message itself is due to include tongue-in-cheek comments about the past year.

The station in referring to the programme as an ‘alternative Christmas message’.

It is due to air at 3:25pm on December 25, shortly after the Queen’s actual festive speech at 3pm.

In the video, the fake Queen – voiced by British actress Debra Stephenson – discusses topics such as Harry and Meghan’s departure from the UK and the Covid-19 pandemic.

However, critics have blasted the upcoming programme as “disrespectful” and some are calling for a boycott of the station as a result.

On Twitter, one user who claimed to live in the US said: “Being in the USA I love the Queen. What a graceful lady.”

READ: Royal coronavirus hero: Queen lauded for being best at keeping spirits up during pandemic

Others defended the upcoming broadcast. One said: “Ofcom aren’t going to uphold a complaint, of that we can be certain.”

Another wrote: “The whole point is to give a light-hearted warning about deepfake tech and I look forward to seeing it in full.”

At one point in the video, the fake Queen is due to say: “If there is a theme to my message today, it is trust. Trust in what is genuine – and what is not.”

Elsewhere she laments the royal departure of Harry and Meghan, stating they “prefer the company of Canadians”.

Analysts are referring to the upcoming programme as an example of a ‘deepfake’ – a computer-generated recreation of a real person.

The aim is usually for the person being portrayed to look and sound as realistic as possible.

In this way deepfakes can be used as a source of humour or satire.

However, there is reportedly growing concern that deepfakes could be used to spread misinformation, for example by making it appear as though someone has said something they did not.

In addition, a Channel 4 documentary into the software claimed over 60,000 deepfake videos had been identified on the web in the 12 months prior, according to research by Sensity.ai.

The documentary, titled Deepfakes: Can You Believe Your Eyes, will be broadcast on December 28.