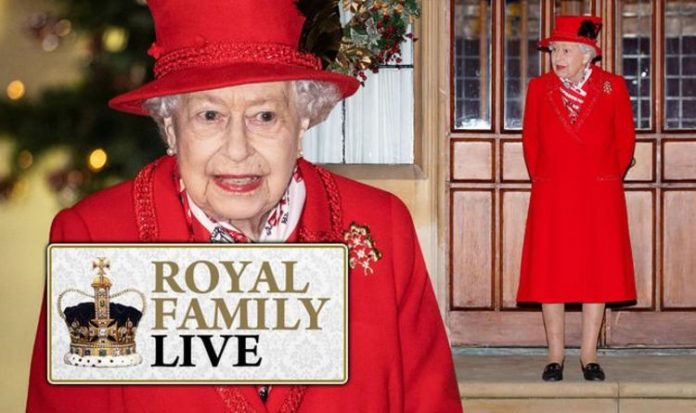 Critics were reminded the 94-year-old monarch was not actually breaking the rules to fight the coronavirus pandemic because she did not have to wear a face-covering outside. Fury erupted after the Queen enjoyed a Christmas carol performance on the steps of her Windsor Castle home – as she welcomed the Duke and Duchess of Cambridge after their Royal Train tour of the country. As a Salvation Army band played festive tunes for the Queen and her family gathered around her, the head of state could be seen quietly singing along.

The Queen’s appearance was the first time she has been seen in public with senior members of the royal family en masse since before the COVID-19 crisis.

Despite being outdoors and observing social distancing measures, the head of state and her family were hit with criticism on social media for not wearing face masks.

Reacting to footage of the royals standing on the steps of Equerries’ entrance at Windsor Castle on Twitter, one user said: “No masks.”

Another user said: “They should all be wearing masks. The pandemic is not over.”

One posted: “The Royal Family just needs to do it. It sends a clear signal to others to please wear a mask.”

But royal fans hit back, saying it was time to “leave the royals alone” because there was “no more debating” about them breaking the rules.

One Express.co.uk reader commented: “The Royal Family are observing the rules at each situation. When indoors, such as the tented gazebo venue, they were standing at a 1.5m distance whilst wearing face masks and when they were outdoors, they observed the very clear cut distance of 2m without face masks.

“Surely anyone with half a brain can recognise that when they were all on the steps outside, they were observing the safe distance protocol of one another + were even further removed from any member of the public.

“Apart from this, given Queen Elizabeth is 94 years old, she may find it difficult to breathe with a mask on for long periods of time, thus making her exempt on medical grounds. LEAVE THE ROYALS ALONE.”

Another said: “Her Majesty The Queen doesn’t have to do anything because she is the Queen, end off, no more debating, no more nitpicking.”

One added: “It was outside, she kept her distance, now back off and go do the dusting trolls…oh and by the way, if you missed it I am anti-royalist. But I believe in fairness.”

ITV News Royal Editor Chris Ship also intervened and pointed out they did not need to wear a face covering.

He tweeted: “They are outside. Masks are compulsory only inside where social distancing is not possible.”

8.23am update: Royal spending row as Queen urged to ‘give money to taxpayers’

The Queen has been urged by an independent tax adviser to provide the UK public with a lump sum as a pandemic-induced financial crisis looms.

The monarch has been heavily affected by the coronavirus pandemic, just like the rest of the world, and reports have claimed she will be seeing a £30million shortfall in her annual profits this year.

The Queen voluntarily pays tax and has done since the Nineties, but she could also be asked to pay a larger amount to help the UK recover.

However, tax adviser David Lesperance from Lesperance & Associates told Express.co.uk that he would come up with another solution for the monarch if he worked with her.

He said rather than agreeing to an increase in estate tax or inheritance tax, the Queen should make a “gesture of goodwill to the British people” through a lump sum.

8.06am update: Camilla picked turkey in oven’ amid Christmas ‘struggle’

Camilla, Duchess of Cornwall, “kicked the Christmas turkey” into the oven as she “struggled” to cope with cooking during the festive season, her son claimed.

Before her life as a senior member of the Royal Family, Camilla used to enjoy the festivities with her children Laura Lopes and Tom Parker Bowles, as well as her ex-husband Andrew.

Recalling those days, Tom admitted that Camilla did “struggle” with cooking around Christmas, and that he once saw her “kicking” a massive turkey into the family’s oven while wearing a dressing gown.