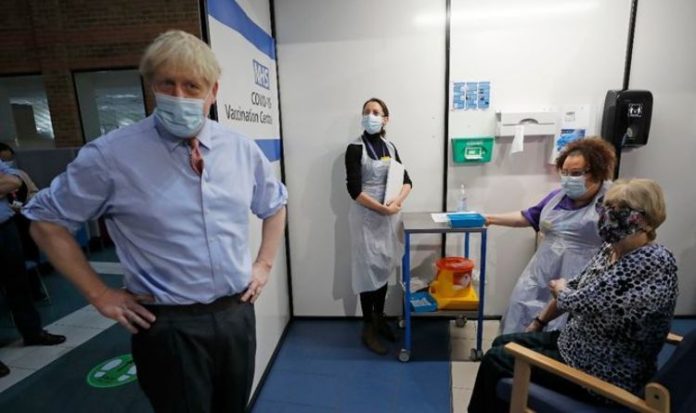 The PM declared we can “beat the virus together” and said it was “very exciting” to see the first jabs administered at Guy’s Hospital, London. But he insisted there is a long way to go before a return to normality.

Mr Johnson said: “It will gradually make a huge, huge difference, but I stress ‘gradually’ because we are not there yet, we have not defeated this virus yet. We can’t afford to relax now.”

He also slammed antivaxxers as “totally wrong” and said Pfizer’s jab – which the UK is first to approve – is safe.

The Prime Minister said: “I would say to all those who are scared, don’t be. There is nothing to be nervous about.”

Lyn Wheeler, 81, from Bromley, South-east London, was the first to be given the jab at Guy’s and was vaccinated in front of Mr Johnson.

When he asked her how it had been, she said: “It’s all for Britain,” and added that “we can’t keep sitting in our houses”.

Labour leader Sir Keir Starmer said it was a “momentous day in our fight against Covid-19”, while Health Secretary Matt Hancock told the House of Commons it was the start of the “fightback against our common enemy”.

But he said there is a “long march ahead” and predicted life in the UK could get back to near normality by the summer.