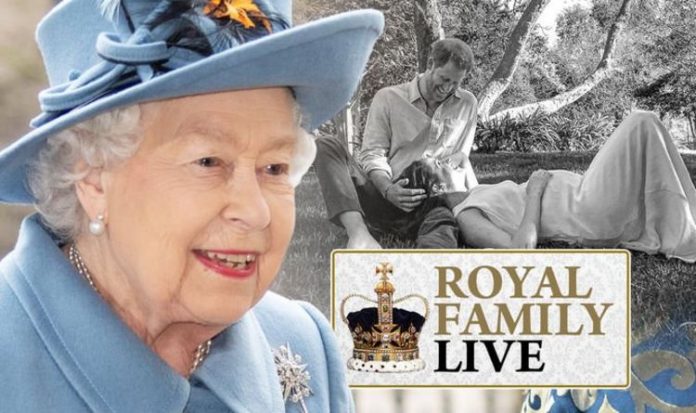 The Duke and Duchess of Sussex marked Valentine’s Day by sharing the happy news they are expecting their second child later this year. Buckingham Palace quickly released a statement to say the Queen and the rest of the royals were pleased with the news. A Buckingham Palace spokesman said: “Her Majesty, Duke of Edinburgh, Prince of Wales and entire family are delighted and wish them well.”

Meghan and Harry are believed to have told the Royal Family before going public – a gesture in marked contrast with their bombshell announcement last year that they were stepping down as senior royals.

With a Megxit review looming on the horizon, one year after they quit the royal frontline, this could be seen as a sign the Sussexes have learned from their mistakes.

The couple quit their roles as senior working royals last March to seek financial independence in the US.

But the Queen was also said to be shocked by their decision as she found out at the same time as the rest of the world.

Meghan and Harry released a black and white photo of themselves, sat under a tree in Los Angeles.

Harry was pictured smiling at his wife and resting his hand on Meghan’s head while she lay in his lap cuddling her bump.

8.38am update: Unearthed interview suggests Prince Harry and Meghan’s second child may be their last

The Duke of Sussex, 36, suggested he would have a maximum of two children to help protect the planet. He joined chimpanzee expert Dr Jane Goodall in an interview for Vogue, telling her: “I think, weirdly, because of the people that I’ve met and the places that I’ve been fortunate enough to go to, I’ve always had a connection and a love for nature.

“I view it differently now, without question.

“I’ve always wanted to try and ensure that, even before having a child and hoping to have children…”

Dr Goodall interrupted to suggest they would not have “too many” children, to which Harry replied: “Two, maximum!

“But I’ve always thought: this place is borrowed. And, surely, being as intelligent as we all are, or as evolved as we all are supposed to be, we should be able to leave something better behind for the next generation.”

Princess Eugenie and her son are set to be pushed down the line of succession to the throne within months following the happy news shared by the Duke and Duchess of Sussex.

The birth of Eugenie and Jack Brooksbank’s son already shook up the line of succession, as their baby now sits at the 11th position.

This means senior royals such as Prince Edward, who until early last week was 11th, and Princess Anne, who was 15th, were knocked down a position in the line to the throne.

However, the happy announcement made yesterday evening by Harry and Meghan means it is now Eugenie and her son’s turn to be pushed down the line.

8.13am update: No going back: William and Harry will NEVER repair relationship – POLL

Rumours of a rift between Harry and William have persisted for years, with the younger sibling hinting at the feud in a TV interview in 2019.

Tensions began when William offered Harry advice on taking things slow with Meghan Markle, something the younger son bristled at.

And the situation escalated when Harry and Meghan stepped down as senior members of the Royal Family without any warning last year.

An Express.co.uk poll – which ran from 1pm yesterday to 7.30am today – indicated the brothers will never be able to repair their relationship.

The poll – which asked: “Do you think Prince William and Harry will ever repair their relationship?” – received 2,781 votes.

Emily Andrews, Mail on Sunday royal editor, wrote on Twitter: “The Sussexes had apparently told the Royal Family their happy news, but not, it seems, that they would announce it.

“Tonight’s announcement caught officials off guard, with no prepared statements.

“But everyone is ‘delighted’ including the Queen, Prince Philip and Prince of Wales.”