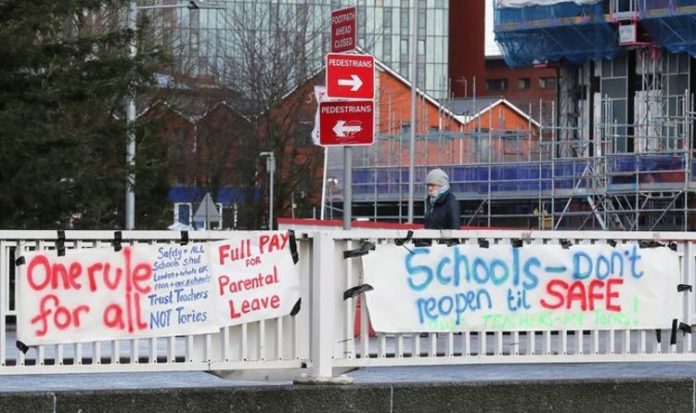 Since the start of the pandemic last year, millions of children have missed out of education after schools were closed during the first lockdown. Many schools reopened in September but were forced to close again in January as England was plunged into its third national lockdown.

Prime Minister Boris Johnson is hoping all primary and secondary schoolchildren in England will be able to return to classrooms as early as March 8 as long as Covid rates continue to decline.

However, unions questioned why Government ministers have abandoned the idea of a “phased” return of year groups which was implemented last year.

Geoff Barton, leader of the Association of School and College Leaders, said: “There is no point in bringing all children back at once if this causes a spike in coronavirus infection rates which forces another lockdown.

“It is vital all options are kept open.”

Dr Patrick Roach, general secretary of the NASUWT union, urged the Government to be led by “the scientific evidence and advice”.

He also called for “evidence of sustained” cuts to the R rate, nationally, regionally and locally.

Steve Chalke, who runs the Oasis academies trust, lashed out at Downing Street’s timetable and claimed it was “impossible”.

He said: “We should be driven by scientific data, not dates.”

Earlier this month, Anne Longfield, the Children’s Commissioner, warned children could be left scrambling to catch up with their school work for five years.

Ms Longfield, who is campaigning for schools to reopen as soon as possible, said: “As this goes on, we are talking about a cohort of children that probably, for the next three to five years, will need that kind of consideration of the loss they’ve had.

“Both in learning but also in that wider socialisation and confidence in their lives.

“When kids went back [after the summer holidays], teachers said they thought on average children were three months behind – but far more if they were disadvantaged.

“That hasn’t yet come through so there does need to be a mechanism that actually measures what that loss has been.

“But it’s not on the scale of the emergency that we’re talking about.”

Plans to reopen schools by March were announced as part of a wider Government strategy to lift lockdown restrictions over the coming weeks and months.

One-to-one outdoor sports such as tennis and golf are soon expected to be given the green light.

Non-essential shops will also be allowed to open in the near future, and there are plans to lift curbs on the hospitality sector.

The Government has insisted that the pace of lifting restrictions will be dictated by scientific data alone.