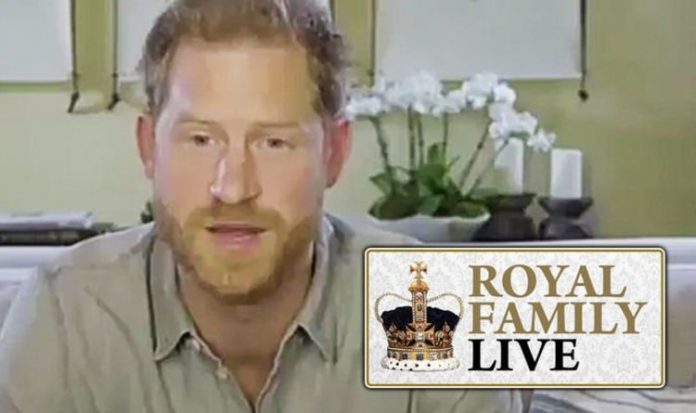 Royal fans lambasted the Duke of Sussex as “woke” after he said the COVID-19 pandemic, which has killed more than 1.49million people, was like “Mother Nature has sent us to our rooms for bad behaviour”. But the 36-year-old was immediately mocked for being “self-righteous” and sparked anger with royal fans asking “did the elderly and vulnerable deserved to be punished?”.

Speaking from California in a video appearance for the new environmental streaming service Waterbear, he said: ”Somebody said to me at the beginning of the pandemic, it’s almost as though Mother Nature has sent us to our rooms for bad behaviour to really take a moment and think about what we’ve done.

“It’s certainly reminded me about how interconnected we all are, not just as people but through nature.

“We take so much from her and we rarely give a lot back.”

The Duke of Sussex then went on to speak about how individuals can take responsibility for the environment, comparing people to “raindrops”.

He added: “Every single raindrop that falls from the sky relieves the parched ground.

“What if every one of us was a raindrop? If every single one of us cared? We do, because we have to, because at the end of the day nature is our life source.”

One said: “Prince Harry the Hypocrite, so the elderly and vulnerable deserved to be punished? I wish he would stop lecturing us with his wife’s woke point of view.”

Another posted on Twitter: “Brainwashed, woke, attention seeking victim Prince Harry thinks we should be “raindrops”
 
 One added: “This is a complete and utter lefty woke.”

Others also dragged Meghan Markle into the response, with one saying: “NO interest in anything him or his wife have to say, hypocrisy at its finest”.

Another tweeted: “Why these two can’t do anything like normal people? Why is everything about them hyperbolic and self-righteous…?!? .”

One added: “Ok Harry we’ll remind you of this next time you fly private!!!”

A Twitter user posted: “Some are raindrops, Harry, and some are flakes.”

7.55am update: Prince Harry SAVAGED for having 16 baths

Piers Morgan has issued a scathing attack on Prince Harry for “having 16 baths” and telling him to “practice what you preach”.

The Good Morning Britain presenter criticised the Duke of Sussex for reportedly having 16 bathrooms in his Montecito mansion. He told him to “practice what you preach” after Harry urged members of the public to be “like raindrops” in order to “relieve the parched ground” during the launch of a new streaming platform for environmental programs.

He said: “Every one of us, ‘what if every single one of us was a raindrop’, he announced.

“This is to cure the world of global warming, obviously, from his Californian mansion, which coincidentally, talking of raindrops, has 16 bathrooms.

“So when Prince Harry says what if every single one of us was a raindrop, well you’re currently using 72million drops of water every day. What about taking some of that and putting that on, what does he call it, the parched ground?”