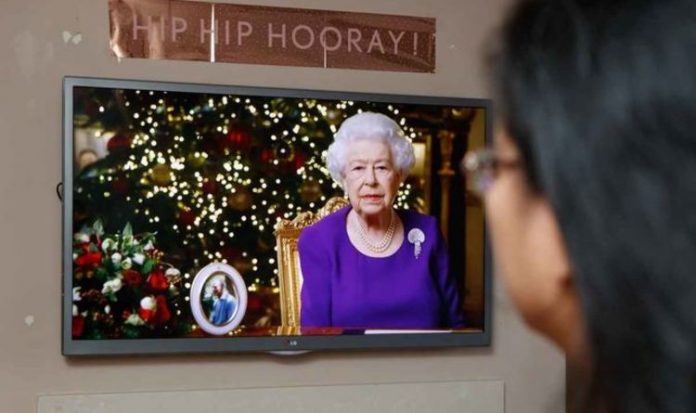 The doctored video was broadcast as a parody of the Queen’s annual Christmas message, with the legitimate version shown on BBC yesterday. In the fake version, however, the Queen mocks other members of the Royal Family before dancing on her desk. The light-hearted video, which was intended in part to show the dangers of what you see online, sparked an angry backlash.

Brexiteer Nigel Farage was not impressed by the video, Tweeting before its broadcast “how dare they” in an angry response to the “deepfake” video.

On Twitter followers of Mr Farage also voiced their outrage.

One said: “Disgusting. The Queen has been steadfast in her duty and still going strong. God save the Queen.”

Another exacerbated Briton on Twitter wrote: “I’m no royalist really but The Queen gets it right every time and the public rightly respects and admires her.”

Another Twitter user said: “Channel 4’s ludicrously smart ‘deep fake’ alternative message is a million miles away from the public mood and not nearly as clever or funny as they think it is.”

In the video the “deepfake” version of the Queen, she said: “One thing that has sustained many of us is our families, which is why I was so saddened by the departure of Harry and Meghan.”

She then joked about knowing she would at least have Prince Andrew by her side.

The “deepfake” was created using computer-generated imagery saw a digitally animated version of the Queen played by actress Debra Stephenson.

The short film was filled with jokes about the irrational rush for toilet roll at the beginning of the pandemic and showed the Monarch preparing for a dance on Tik Tok.