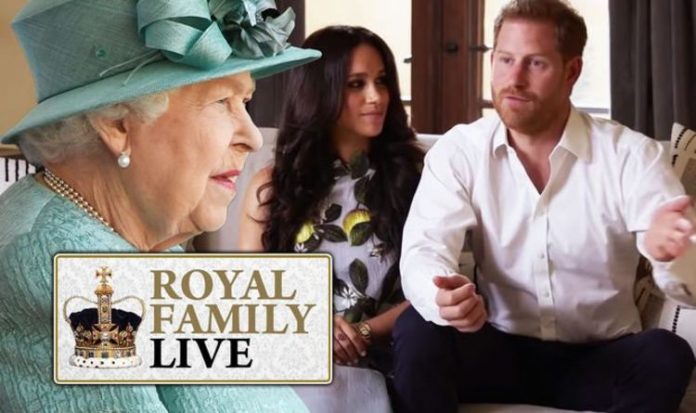 The Duke and Duchess of Sussex “didn’t see it coming”, an insider said days after the Queen confirmed her decision. The monarch, who opposed a half-in-half-out scenario, stunned the pair with the harsh measures last week as Megxit was confirmed.

And the decision has also impacted Meghan and Harry’s upcoming bombshell interview with Oprah which will now need to be re-edited.

It is understood former actress Meghan, 39, and Harry, 36, spoke about their roles in the monarchy which have now “significantly” changed during filming earlier in the week.

CBS wants to re-shoot some of the interview in light of the Megxit announcement, the source said.

The insider told the Mirror: “When the Duke and Duchess spoke, it was never envisaged they would have their patronages taken away.

“They didn’t see it coming and spoke as they still had roles to play.

“Now, however, other than their titles, they are to have no role in royal life – a point producers know was not discussed when Winfrey spoke to them.

“Neither the Sussexes nor the TV crew saw the fallout of their interview leading to this. Harry and Meghan thought they would retain their roles.

“But things have significantly changed for them since they eagerly sat for Winfrey and poured their hearts out.”

Meghan and Harry’s interview with Oprah airs on CBS on March 7.

The couple – who are living in California and expecting their second child – quit royal duties in March 2020 for a new life of personal and financial freedom.

7.30am update: Harry and Prince William’s relationship ‘not where it was’

Prince Harry and Prince William’s relationship is “not where it once was” following a tumultuous year for the royal brothers, according to a source close to the Sussexes.

Speaking to ET Online, the source said: “It’s not where it once was.

“However, they are brothers and will support each other and are committed to coming together to honour their late mother’s legacy.”

7.25am update: Meghan and Harry ‘haters’ will be ‘disappointed’ after Oprah interview

Writing in the Mirror, journalist Darren Lewis said: “Anyone who watched The Oprah Winfrey Show during the Eighties and Nineties will know the Mississippi-born producer, author and actress is a woman trusted by great swathes of middle and working class America.

“A mother figure with the strong principles and quiet dignity of Meghan’s own mum, Doria Ragland.

“To listen to the commentators pontificating on the strategy that Oprah will take is to know they have not watched a single one of her shows.

“Oprah is gentle, sensitive and understanding. She is no headline-chasing sensationalist.

“She has her own stories to tell about refusing to be silenced, fighting to ensure others have a voice and the unconscious bias to which Meghan has opened Prince Harry’s eyes.”