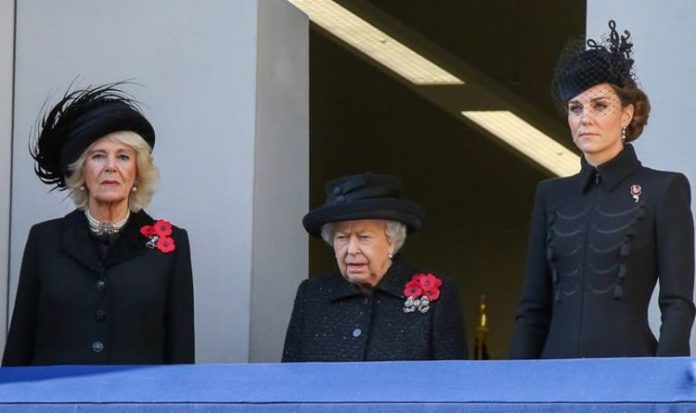 Due to the coronavirus pandemic only members of the socially distanced choir will be permitted to sing. This also applies to all hymns played during the commemorative service.

COVID-19 restrictions mean major changes have been made to this years Remembrance Day events.

A special service is being held in Westminster Abbey to mark 100 years since the Cenotaph was unveiled on Whitehall in 1920.

This will be attended by senior royals, politicians and military veterans.

However only 80 VIPs will attend the event, which will be broadcast live on BBC1.

The Government has imposed a ban on “communal singing” due to “the potential for increased risk of transmission from aerosol and droplets”.

Speaking to the Daily Mail, a spokesman for Westminster Abbey confirmed the restriction would apply to the Remembrance Day service.

Based on Public Health England advice singing will be restricted to the Choir of the Chapel Royal.

The decision was made by the Department of Culture, which is overseeing the event.

Instead a smaller event, attended by just 30 veterans, will go ahead.

Royals, politicians, religious leaders and veterans will still lay wreaths by the Cenotaph as is customary.

Police will erect giant screens at the top and bottom of Whitehall to prevent public viewing.

On its website the Royal British Legion, which organises the commemoration, explained why the changes are needed.

It said: “Owing to the COVID-19 pandemic and in light of the risks posed, the annual Remembrance Sunday March Past the Cenotaph will not take place this year.

“We recognise this will be deeply disappointing for all who were due to take part and it is not a step that has been taken lightly.

“This decision has been taken by the Government based on expert advice to protect the health and well-being of those who would have been travelling to and participating in the event.

“The Government led Remembrance Service at the Cenotaph will continue to go ahead as a closed ceremony.

“Despite the changes this year, we are encouraging people across the nations to ensure Remembrance Sunday is still marked appropriately by taking part in remote and socially distanced Remembrance activity.”

On Friday the Government’s Scientific Advisory Group for Emergencies (SAGE) revealed COVID-19 is spreading four times faster in England than anticipated in its “worst case” scenario.