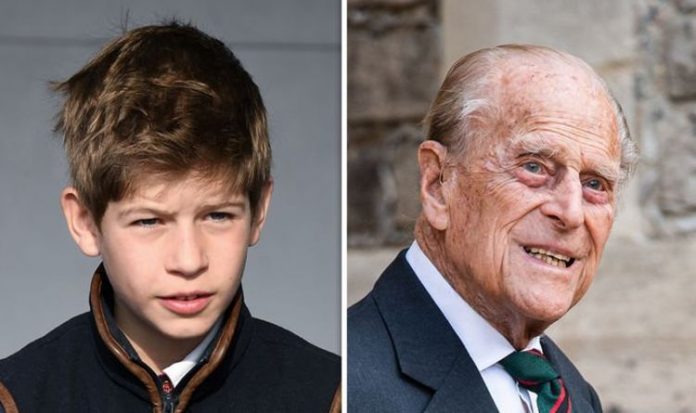 The Duke of Edinburgh was admitted to King Edward VII Hospital in London yesterday “as a precautionary measure” after “feeling unwell”, Buckingham Palace said in a statement released today. Philip, 99, is said to be in “good spirits” and walked into the hospital unaided, where he is being treated for a pre-existing medical condition unrelated to coronavirus. He is expected to stay for a few days “of observation and rest”.

The Queen, 94, remains at Windsor Castle, where she has been shielding for most of the pandemic with her husband.

The couple’s youngest grandchild James is the son of Prince Edward and Sophie, Countess of Wessex.

James, 13, has taken over a role previously held by Philip during the summer months spent at Balmoral Castle in Scotland.

The young royal impressed everyone with his ability to flip burgers at the family barbecue, something usually carried out by Philip.

READ MORE: Prince Philip wants ‘nothing to do with’ 100th birthday celebrations

James is said to be the Queen’s favourite grandson and delighted his grandmother with his skill for fly-fishing, a beloved pastime of the Queen Mother.

A royal source said: “[James] is rather good at flipping burgers and liked to get fully involved whenever there was a family barbecue at Balmoral.

“That used to be Prince Philip’s domain, but less so these days.”

The source added that James also impressed the gamekeepers at Balmoral with his ability to cast for salmon.

“The Balmoral ghillies were impressed with both of them.

“Edward is not as keen because he’s not as patient, which you need to be when fishing for salmon, even in the plentiful Dee.”

James is now 13th in the line of succession, having been bumped down by one when Princess Eugenie had her baby last week.

The teenager comes after his father Edward and before his older sister Lady Louise Windsor, 17.

Louise has also taken on something previously favoured by Philip: carriage driving.

Philip has been a fan of the sport for years and popularised it in the UK himself.

Another special connection between the Wessex children and their grandfather is their surname.

Louise and James were the first of Philip’s descendants to have his name Mountbatten.

This was due to a historical row with the Queen over the passing on of the name Windsor, along with the fact Edward and Sophie decided not to give their children HRH titles.

Philip has suffered from ill health in recent years, most recently going into hospital for a few days in December 2019, before being discharged on Christmas Eve.

Some royal fans noted the Duke still looked under the weather as he left hospital, but he looked much better when pictured last summer at a military ceremony in which he handed over one of his patronages to Camilla, Duchess of Cornwall.

The last photograph of Philip was released in November to mark his 73rd anniversary with the Queen.

The couple were pictured at Windsor Castle looking at a homemade card from their great-grandchildren Prince George, Princess Charlotte and Prince Louis.