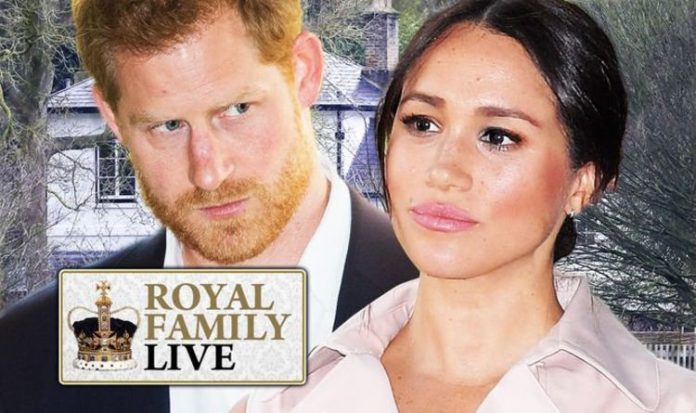 The couple has decided to allow Princess Eugenie and Jack Brooksbank to move into the property while they live in the US – a sign royal observers claim shows Meghan and Harry have no plans to return. Frogmore Cottage remains Meghan and Harry’s UK base, after they paid off taxpayer funds for the renovation of the property after their wedding.

Twitter users said the couple could snub their one-year Megxit review, expected to take place in March 2021, 12 months after the couple officially stepped down as senior royals.

One fan, whose bio states they are a “hardcore, unapologetic fan and defender of Meghan Duchess of Sussex”, wrote: “Why am I so damn happy that Harry and Meghan are letting Eugenie and her husband stay at Frogmore?

“It means, what we been knew, they ain’t going back. And they are saying f**k that one year review!”

Another user agreed and said: “Why are some people upset about Eugenie and Jack living in Frogmore Cottage?

“A few months ago we celebrated Harry and Meghan paying back the renovation cost of FC.

“We were all hoping that Harry and Meghan give them keys back during that one year review.

“I still hate the fact that people keep saying Frogmore was a gift but they had to pay rent and the renovation cost for a house that they don’t own.

“I hope this means that they want be spending to much time in the UK. If they plan on visiting for whatever reason, stay at a nice hotel.”

A third wrote: “I hope they’ll be doing that review by themselves in that family because Harry and Meghan won’t be showing up. #bookedandbusy.”

Earlier this year Meghan and Harry repaid the £2.4million taxpayers money spent on renovating the cottage in 2018.