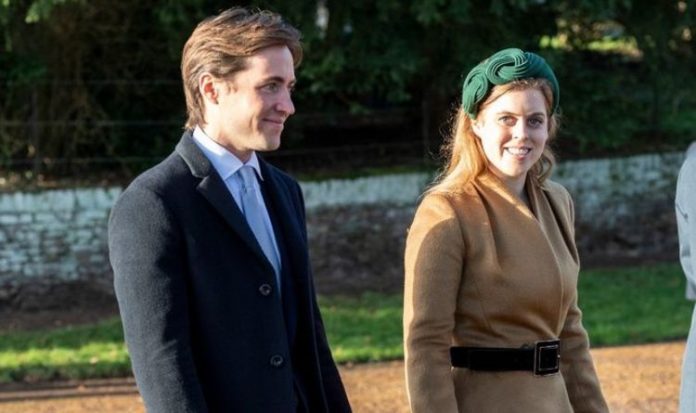 The couple, who got married in July, were photographed as they walked to a Waitress supermarket in the capital. Both Beatrice and Mr Mapelli wore black face masks with their smart casual outfits.

Beatrice donned a flowy midi skirt and flat shoes, and wrapped up in a black coat and tan scarf.

Princess Beatrice is set to replace her cousin, Prince Harry, in a specific role, a royal expert has claimed.

Royal commentator Marlene Koenig said the Duke of Sussex is no longer able to be a member of the Privy Council due to his move to the US.

Ms Koenig told Express.co.uk that Princess Beatrice is a likely option to substitute Harry in the Council alongside Prince William, Camilla, the Duchess of Cornwall and Prince Charles.

Ms Koenig said: “Because Prince Harry lives in the United States he can’t be a member of the Privy Council.

“So if he is officially established as having US residency, Princess Beatrice moves up one, for councillors of state.

“For the regent, Prince Harry would not be able to be regent if anything happened to Charles and William before George reached maturity, previously Harry would be the regent.

Beatrice and her sister, Princess Eugenie, have always shared a close friendship with their cousin Harry.

So much so, that Princess Eugenie and her husband Jack Brooksbank are reported to have moved into Frogmore Cottage, Harry and Meghan Markle’s UK residence in Windsor.

A blue Abels removal van was spotted yesterday outside the gates of Windsor Castle, in Berkshire.

The van was also seen driving around the estate towards Frogmore Cottage.

A source told : “Removal vans pitched up in the dead of the night and cleared out the cottage. They definitely did not want to be seen.