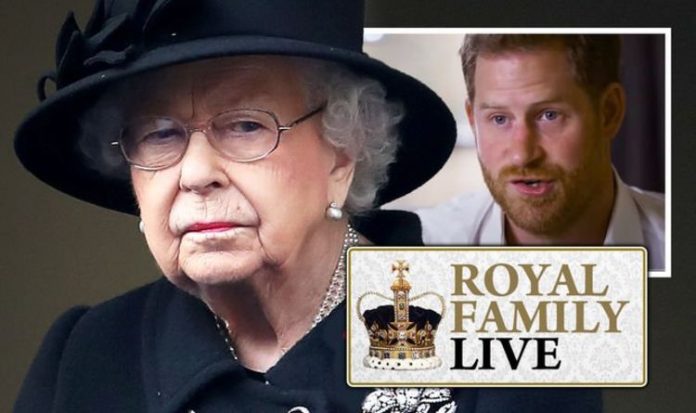 Last week, Buckingham Palace said in a statement Harry and Meghan Markle had told the Queen they would not be returning to the Firm after their one year review period. The statement said the Royal Family are “all saddened by their decision”.

Under their previously deal with the Queen, they still retained their HRH titles but did not use them as non-working members of the Royal Family.

Now, the titles will have to be reassigned to other working members of the Royal Family – including Harry’s military honours.

According to insiders, the Queen will be the one who has the final say on who gets Harry’s old titles – with William potentially in line.

A royal source told : “Who takes over from Harry is a thorny issue in the family so giving the Queen the final say is the right thing to do.”

Another added: “Ultimately, it’s the Queen’s decision. The posts are in her gift.”

According to the Daily Mirror, the Queen is believed to have picked “long ago” which royals will take over the couple’s roles.

Prince Edward, or his wife Sophie Wessex, could soon become National Theatre patron, while Princess Anne could potentially replace the Duke as Captain General of the Royal Marines.

READ MORE: Queen ‘doesn’t give a monkey’s’ about Prince Harry as Duke is insulted

A spokesperson for Harry and Meghan said: “As evidenced by their work over the past year, the Duke and Duchess of Sussex remain committed to their duty and service to the UK and around the world, and have offered their continued support to the organisations they have represented regardless of official role.

Meghan and Harry announced they would be stepping down as senior members of the Royal Family last year, a move which shocked the world.

In a bid to be financially independent, the couple have signed multimillion pound deals with Spotify and Netflix.

SEE BELOW FOR LIVE UPDATES….

7.50am update: Prince George ‘may never be king’ – Royal expert explains why

Prince George is third in line to the throne, but despite being raised to one day wear the crown, there is a chance the young royal will never be king – a royal expert has explained why.

Prince George, seven, is Kate, Duchess of Cambridge, 39, and Prince William’s eldest child and heir to the British throne.

As things currently stand the young royal is third in the line of succession behind his grandfather Prince Charles, 72, and father William.

While George is expected to take the crown from his father one day, his accession may never happen, a royal expert has claimed.

7.45am update: ‘We’re keeping our fingers crossed’ Prince Philip will stay in the hospital for several days

The Duke of Edinburgh has an infection and is expected to stay in the hospital for several more days, Buckingham Palace has announced.

The disclosure is the first official explanation for Prince Philip’s admission last Tuesday. Palace officials said Philip, 99, was “comfortable and responding to treatment” and his youngest son, Prince Edward, revealed his father’s condition had improved.

It was not clear if Philip is suffering from a recurrence of the bladder infections that have dogged him previously, leading to at least two spells in the hospital in 2012.