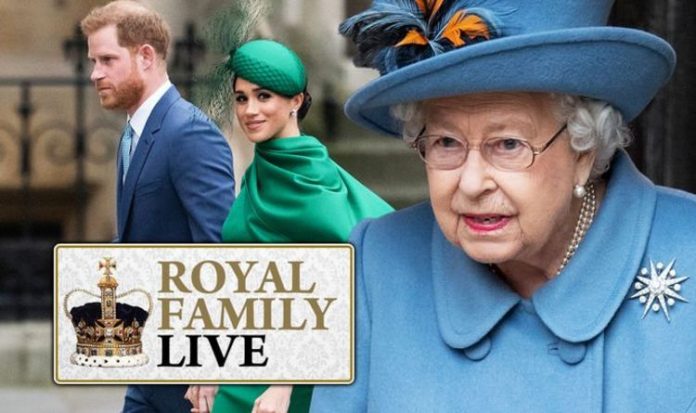 The Duke and Duchess of Sussex have said they will not return to their roles as working royals but have indicated a desire to reunite with family members for special occasions. The monarch, 94, is expected to be joined by senior royals for a multi-day celebration including a flypast over Buckingham Palace watched by the family from the balcony.

Senior royals are also expected to take part in organised events in London and other cities to showcase the Queen’s service to Britain.

But when Harry, 36, and Meghan, 39 fly in from the US, palace aides will have a testy situation on their hands when trying to incorporate them into frontline appearances.

An insider told : “Harry wants to be there. It is already causing a headache and is going to be very awkward.

“Where will they be positioned if they turn up? What events can they attend?

“Will we put them on the Buckingham Palace balcony for the flypast?

“This is a celebration for the Queen’s 70 years of service to the nation and should not be overshadowed.”

On February 6 next year the Queen will mark 70 years on the throne.

But a party to celebrate the Platinum Jubilee Her Majesty is expected to take place in June 2022.

Britons will see their May Bank Holiday pushed back to June 2 to make way for the momentous occasion.

Culture Secretary Oliver Dowden has said the Queen deserves a “celebration to remember”.

It is not yet known if the Sussexes intend on bringing their children to the UK for their great-grandmother’s day of honour.

Archie will turn three a month before the Platinum celebrations while the couple’s second child, thought to be due in about three months, will have turned one by next summer.

8.16am update: ‘Garbage they have been spouting’ John Humphrys slams ‘sanctimonious’ Harry and Meghan

Meghan Markle and Prince Harry have been shamed for “spouting garbage” by British broadcaster John Humphrys.

During a heated debate on the Duke and Duchess of Sussex on ITV’s Good Morning Britain, Mr Humphrys and Piers Morgan criticised the couple’s flip-flopping on a number of issues.

Mr Morgan singled out Prince Harry and Meghan Markle‘s campaigning on global warming and contrasted that with the Duke of Sussex’s recent trip on Elton John’s private jet.

Mr Humphrys said: “My view is let them do what they like and let us take no notice of them unless they do something noteworthy.

“Preaching at us is not good enough, anybody can preach and some of the garbage they have been spouting, really?”

7.52am update: Harry and Meghan donate to Texas charity after state battered by Storm Uri

The Duke and Duchess of Sussex, through their Archewell Foundation, donated to Genesis Women’s Shelter and Support in Dallas.

The charity tweeted to thank the couple for donating to replace the damaged roof of one of their buildings.

Genesis tweeted: “Today, the news of our damages reached Prince Harry and Meghan, The Duke and Duchess of Sussex!

“Through their nonprofit, they are supporting us by replacing the roof at our transitional housing facility & helping us meet our immediate needs.