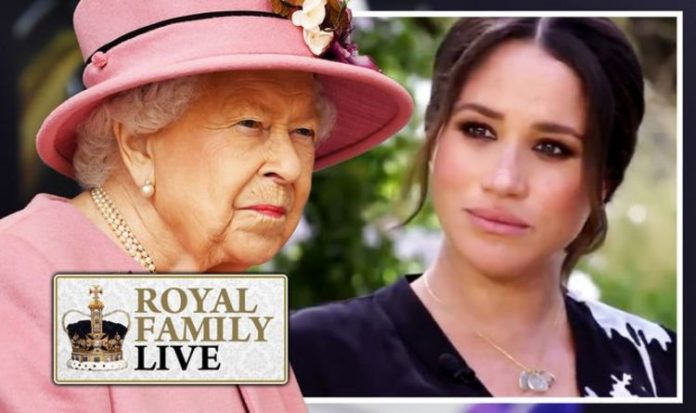 In a teaser released by CBS, Oprah touches on the subject in a direct question to Meghan, who is seen sitting on an outdoor lounge chair cradling her baby bump. Oprah asks her: “Were you silent or were you silenced?” The American TV hosts told viewers there is “no subject that is off-limits” in a 30-second clip released by the US network ahead of the airing of the interview on March 7.

Oprah also hinted that the Queen’s grandson and his wife may have said things that palace aides will be unhappy about.

Facing the couple on the outdoor interview setting in California, she said: “You’ve said some pretty shocking things here.”

The short clip of the Sussexes’ first post-Megzit interview will have jolted palace aides more than a year after the couple stepped down as senior royals.

Harry, 36, and Meghan, 39, will use the 90-minute documentary to air their side of the story a year-and-a-half since they first hinted at tensions behind closed doors.

During their September 2019 interview with ITV while on tour of southern Africa, Harry admitted that his relationship with his brother Prince William was not as strong as it once was.

And Meghan spoke out out the pressure of royal life and how she was finding it difficult behind the scenes.

She said: “I really tried to adopt this British sensibility of a stiff upper lip… but I think that what that does internally is probably really damaging.”

8.00am update: Prince Harry tells Oprah ‘biggest concern’ was ‘history repeating itself’ in hint at Diana

Prince Harry told Oprah Winfrey his main concern was “history repeating itself” during a sneak peek at next week’s highly anticipated interview.

In a trailer for the upcoming interview, released on Sunday evening, the Duke said: “My biggest concern was history repeating itself.”

Prince Harry appears to compare Princess Diana’s experience as a member of the Royal Family with his own alongside his wife Meghan.

In a separate clip, the Duke told the TV host: “For me I’m just really relieved and happy to be sitting here talking to you with my wife by my side.

“Because I can’t begin to imagine what it must have been like for her going through this process by herself all those years ago.”

7.54am update: Meghan interview teaser sends Royal fans into meltdown – ‘This will be heartbreaking’

Meghan Markle’s forthcoming interview with TV chat show legend Oprah Winfrey has sparked huge speculation among Royal fans about what the Duchess may or may not say.

One fan tweeted: “I think this #HarryandMeghan interview with @Oprah is going to be both revelatory and heartbreaking.”

A royal source told recently that it was “time to hide behind the sofa at the palace,” in reference to the Oprah interview.