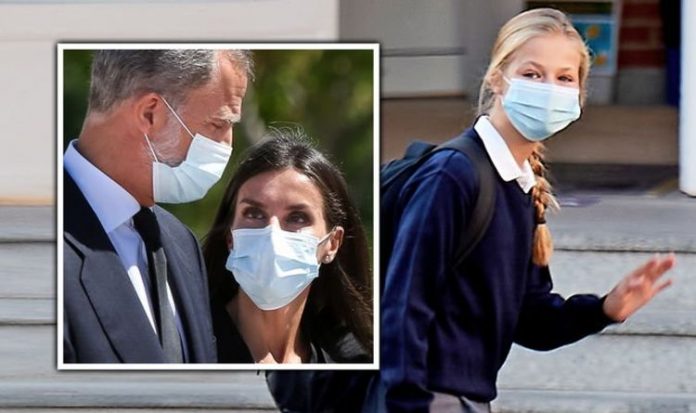 The eldest daughter of King Felipe and Queen Letizia of Spain, Leonor, is to undergo a 14-day quarantine after one of her classmates tested positive for COVID-19. Princess Leonor, and the rest of her class, will not be allowed to leave her home while self-isolating and will be monitored for symptoms.

But the 14-year-old isn’t the only member of her family forced to self-isolate.

As Leonor was joined in school on Friday by her younger sister Sofia, the younger daughter of Felipe and Letizia will also need to quarantine.

The Spanish Royal House announced the young royals will follow the protocols put in place by the country’s health organisations.

Princess Leonor, the heir presumptive to the Spanish throne, returned to her school, the Santa Maria de los Rosales in Madrid, on Wednesday, to attend her fourth-year.

Spanish authorities have created small bubble groups of children in schools to avoid the amount of people students come in contact with and limit the infection.

Classes have been slashed in number and strict measures have been implemented to protect children and teachers.

However, several classes have already been ordered to quarantine due to positive cases.

According to the national Education Minister, Isabel Celaà, 53 schools out of the 28,600 in Spain had already experienced positive cases by Thursday, three days after the beginning of term.

Spain has been one of the European countries most hit by coronavirus during the spring and is currently going through a second wave of infection.

On Friday, the country recorded 4,708 positive cases, bringing its total to 566,326, the highest in western Europe.

The country has also mourned 29,747 deaths since the beginning of the coronavirus pandemic.

News of the quarantine for the two young princesses came at an already difficult time for the Spanish Royal Family.

The former king, Juan Carlos I, suddenly left the country last month while his finances are under scrutiny in a major corruption probe.

The monarch who helped Spain transition from a dictatorship to a democratic society travelled in secret to the United Arab Emirates (UAE) on August 3.

After days during which Spaniards were left wandering on the whereabouts of the 82-year-old, his spokesman confirmed he was staying in the Middle Eastern country.

Juan Carlos had previously revealed his intentions to leave Spain to his son Felipe in a letter.

Explaining he was making the decision “in the face of the public repercussions that certain past events in my private life are generating”,

King Juan Carlos said he hoped his son could continue carrying out his duties as monarch with “tranquillity” despite the scandal.

Juan Carlos denies any wrongdoing and has said he is available if prosecutors need to interview him.

The former king had stepped back from royal duties in 2014, when he handed over the crown to his son Felipe.