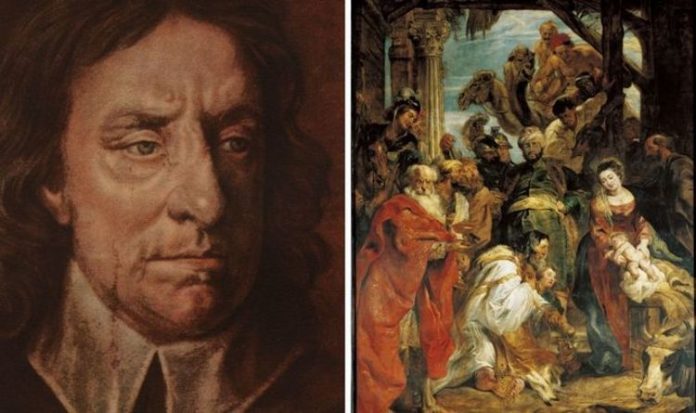 For millions of families across the country, Christmas celebrations have been put on ice as the UK is gripped by the coronavirus. Those living in areas such as London and the south east will be unable to share the special day with those they hold dearest, while the rest of the UK may only see the friends on the day itself, in a bid to halt the virus’ spread. Back in the 17th century, a similar move to cancel Christmas was made, but for a completely different reason.

Cromwell’s place in history is secure after he famously led the Parliamentarians, also known as the Roundheads, to victory over his Royalist, or Cavalier, adversaries during the bloody Battle of Worcester in 1651.

Defeat saw the monarchy abolished, and Charles I executed, as Cromwell saw Parliament take charge over England after years of conflict.

For generations, Royal Family fans have been critical of Cromwell’s role in history, with some even claiming he was behind the controversial decision to axe Christmas as a day of celebration.

But, unearthed accounts reveal, it was actually religious groups within Parliament that had become so incensed with the extravagance of the December 25 celebrations, they went on a mission to halt festivities.

Christmas: A 1900 depiction of a 17th century Christmas (Image: GETTY)

Legend has it that Cromwell was behind the decision, but although he was an MP sitting in Parliament when religious figures began to question the celebrations, he was not actually present to vote through laws as he was often away from London in the 1640s.

As a religious man, however, it was likely Cromwell may have been sympathetic towards the process.

According to the University of Chester, the annual ritual of Christmas was similar to what we enjoy today, with the occasion marked with offices and workplaces closed, and “an extended period of celebration and merriment, lasting until early January”.

A statement from the university explained: “Overall, for those who could afford it, it was period of greater leisure, of eating and drinking to excess, of dancing and singing, gambling, gaming and stage plays, of drunkenness and pleasure; a period when normal rules did not apply, of inversion and ‘misrule’.”

Oliver Cromwell and Charles I in 17th century (Image: GETTY)

However, soon the more devoutly religious began to take offence to the frivolity of the occasion, which they demanded be respected as a day of worship and fasting.

Some would go on to urge the authorities to ensure it became a day of “humiliation”, where worshippers would consider the sins they had made throughout the past year.

The statement continued: “They disliked all the waste, extravagance, disorder, sin and immorality of the Christmas celebrations, but they also saw Christmas as an unwelcome survival of the Roman Catholic faith, a popish festival with no biblical justification – nowhere had God called upon mankind to celebrate Christ’s nativity in this way, they said.”

DON’T MISS:
How will Prince George, Charlotte and Louis spend Christmas? [ANALYSIS]
Death to 2020 Netflix cast: Who is in the cast of Death to 2020? [INSIGHT]
Camilla snub: Charles forced to fulfil royal Christmas engagement solo [LATEST]

In the early 1640s, while Charles I was still King, power moved from the monarchy to Parliament, and so began the process of Christmas being “cancelled”.

Among the first restrictions placed, was that the last Wednesday of every month should be considered a fast day – something that became law in 1642.

By 1644, Christmas Day was the last Wednesday of the month, and so Parliament stressed that Christmas would remain a day of fasting, and for remembering “the sins of those who in the past had turned the day into a feast, sinfully and wrongfully ‘giving liberty to carnal and sensual delights’”.

The following year, a group of ministers – not including Cromwell – produced the Directory of Public Worship, which set out that Sundays would be included as strictly holy days.

It also marked that festival days, including Christmas, were not to be celebrated but spent in respectful contemplation.

Historic England detailed that this law came into effect in 1656 and was “enacted to ensure that every Sunday was stringently observed as a holy day – the Lord’s Day”.

This meant that while shops were closed on Sundays across the nation, markets and offices would reopen on December 25, while soldiers in London “were ordered to patrol the streets, seizing any food they discovered being prepared for Christmas celebrations”.

Christmas was observed by some – who were against the legislative changes – up until Cromwell was swept away and the monarchy restored, leading to the Restoration of 1660.

The Restoration saw many of the laws created during Cromwell’s reign removed, and Christmas restored.