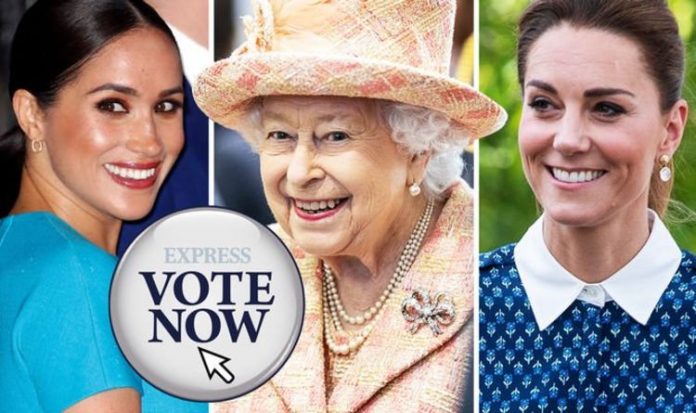 Queen Elizabeth II remains steadily at the helm of the Royal Family, despite the coronavirus pandemic has forced her to change the way she undertakes her royal work. Aged 94, the monarch continues to embrace technology to deliver her message and carry out her royal duties via video link while shielding from COVID-19.

In early April, the Queen signalled what a powerful morale booster she can be by delivering a poignant and personal speech.

With it, she urged Britons not to lose hope despite terrifying reports on rising deaths and coronavirus cases and confidently stated “we will meet again” at the end of the crisis.

For the most part of the year, the monarch self-isolated at Windsor Castle, but continued to hold weekly meetings with the Prime Minister and started carrying out visits and audiences via video calls.

Before COVID-19 arrived in the UK, the Queen started 2020 dealing with Meghan Markle and Prince Harry’s decision to step down as senior royals.

Which member of the Royal Family is your favourite after a challenging 2020? (Image: GETTY)

The monarch discussed the terms of her grandson and the Duchess of Sussex’s exit as full-time working members of the family a just weeks after New Year’s Day.

While losing two young and popular members of the Royal Family was likely painful for the monarch, the Queen is said to have recently approved a major shake-up within the Royal Family, resulting in what has been dubbed as the“New Firm”.

This, a source said, will see the Cambridges, the Wessexes, Prince Charles, Princess Anne and Camilla, Duchess of Cornwall, working together on causes they care about and carrying out more joint engagement in 2021, as soon as the pandemic will allow it.

Prince William and Kate, Duchess of Cambridge, have been outspoken about the necessity to support key workers throughout the pandemic.

The Duke and Duchess spoke multiple times during the first national lockdown about the toll on mental health the coronavirus crisis is going to take on frontline workers, and pledged to make their “top priority” to support them as long as needed.

This year, Kate also launched two landmark initiatives – the 5 Big Questions on the Under-Fives, which eventually resulted in a comprehensive study on how important the country deems the first five years of lives for the development of future adults, and the Hold Still photography contest.

The Queen ascended to the throne in 1952 (Image: GETTY)

In March they travelled to Ireland, becoming the first royals to travel to an EU state member after Brexit.

Earlier this week, they toured Great Britain to thank key workers for their efforts as well as discuss the impact the pandemic is having on students, teachers and industries such as the arts and tourism.

However, this tour was not welcomed with open arms by a few politicians in Scotland and Wales as well as several members of the public, who questioned whether a journey via train across the country while travelling restrictions are still in place was the right call.

Prince Charles and Camilla’s year is ending on a bittersweet note.

The Prince of Wales, who was diagnosed with a mild bout of COVID-19 in March, and his wife continued to work from their home in Birkhall during the national lockdown and stepped in for the Queen when she could not meet in person foreign leaders such as France’s President Emmanuel Macron.

In April, they celebrated their 15th wedding anniversary and marked it with their fans by sharing a relaxed picture of themselves smiling on the porch outside their Scottish home.

Last month, the couple experienced a flurry of negative comments and cruel abuse.

Kate and Prince William arriving at the London Palladium with their children (Image: GETTY)

On November 24, Clarence House, their Twitter account, limited the possibility to leave comments under their posts only to accounts it follows or it mentions.

Sophie, Countess of Wessex, has been volunteering with various associations throughout the pandemic on top of carrying out royal duties.

Insiders told the Daily Mirror she has been dubbed “the Royal Family’s secret weapon” for being able to step up to the plate and quietly do her job during a tumultuous year.

Princess Anne remains one of the hardest-working royals and, similarly to Sophie, continues to work without fanfare with her patronages and associations.