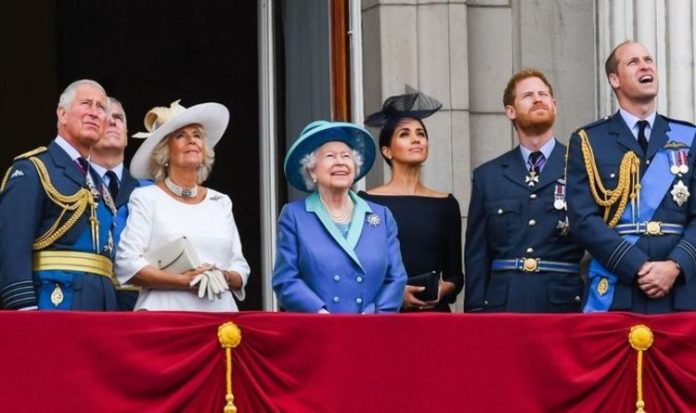 Jennie Bond, the former royal correspondent of the BBC, argued young royals may be “fine” if the UK ever decided to become a republic. She said: “If the country wanted to go down the presidency route, I’d be perfectly happy.

“I think it would also be fine by the Royal Family — after all, who wants to live in a goldfish bowl all their lives?”

Speaking to Platinum magazine, the royal commentator added she also does not believe the majority of British voters desire to get rid of the Crown anytime soon.

She said: “I firmly believe that if we had a referendum, the vast majority would vote for the status quo.

“Certainly while the Queen remains on the throne and, eventually, Prince Charles, who’s commanded a lot of respect in recent years, there is something undeniably stable which helps the nation.”

Prince William, who is second-in-line to the throne, currently enjoys almost as much popularity as the Queen, according to a YouGov poll.

Out of the 1080 people surveyed between July and October 2020, 78 percent of them have a positive opinion of the Queen.

Only 11 percent of those polled have a negative opinion of the monarch and 10 percent held a neutral position on her.

READ MORE: Would you choose republicanism over Prince Charles when Queen dies?

Over the same period of time, 1206 people were asked about their opinion on Prince William.

Of the total polled, 73 percent said to have a positive opinion of him while 9 percent had a negative one.

16 percent of the surveyed said to have a neutral opinion of the Duke of Cambridge.

The high popularity of William among the British public may indicate the Crown will safely remain at the helm of the country and the Commonwealth for decades to come.

Prince William’s firstborn Prince George is set to follow in his father as future king.

The little royal has already been introduced to royal duties, as he has taken part in three tours abroad with his parents.

He first travelled on behalf of the Queen in 2014, touring Australia and New Zealand when he was only nine-month-old.

He later travelled with his parent and Princess Charlotte to Canada, Poland and Germany between 2016 and 2017.

However, Prince William and Kate, Duchess of Cambridge, are believed to be “trying to delay” the moment Prince George will realise he will one day be King.

Catherine Mayer, author of ‘Charles: The Heart of a King’, told E! News: “With George they are trying to delay that moment of realisation and give him normality before they thrust this on him.

“But it will be, nevertheless, part of his upbringing both in terms of what he sees his parents and grandparents doing and probably quite soon a beginning of an understanding that he is in public life and what that means.”