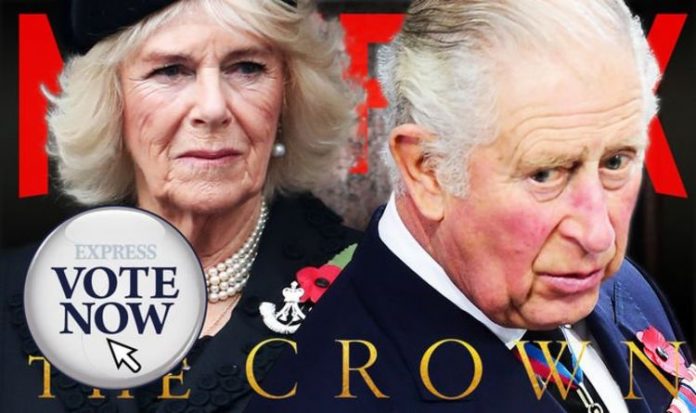 The fourth series of the fictionalised drama based on historical events includes the love triangle of Prince Charles, Princess Diana and Camilla Parker Bowles in the 1980s. The show depicts a lovelorn Diana as she desperately tries to make her doomed marriage work, despite Charles longing to be with Camilla instead of her.

The Crown implies Charles and Camilla had an affair throughout his marriage to Diana.

So much so, the depiction has sparked a flurry of criticism of Prince Charles and Camilla, who married in 2005, with US streaming giant accused of “exploiting the Royal Family for financial gain”.

Concerned commentators and sources close to the Firm have called for Netflix to add a disclaimer so viewers are warned the series has scenes that are fiction and not fact.

Sources close to the Queen and her family revealed they are far from happy with the “wildly inaccurate” events shown in the smash hit show.

The controversy comes after Clarence House was yesterday forced to limit comments on Prince Charles and Camilla’s Twitter account following a wave of abuse directed towards the Duchess of Cornwall and the future King.

Meanwhile, Prince William is understood to have accused the Netflix series of not showing a “very fair depiction” of the tumultuous marriage between his father Prince Charles and late mother Princess Diana.

And Winston Churchill’s grandson, Sir Nicholas Soames, recently accused The Crown of a “vile misrepresentation” of the Royal Family.

He wrote on Twitter: “Just watched an episode of The Crown.

“Truly appalled at the deliberate mischief-making, lies and meanness, clearly intended to be a vile misrepresentation of The Royal Family #shockingrubbish”.

And several royal commentators have recently warned about the possible damage The Crown could cause the monarchy.

Hugo Vickers, author of The Crown Dissected, a book fact-checking events portrayed in the Netflix show, called last the hit show to add a disclaimer before the beginning of each episode stating it is a work of fiction and not a documentary.

While royal biographer Sally Bedell Smith said The Crown could be taken as a truthful representation of the facts by some viewers, given its lavish production and excellent acting.

She said this could have a negative impact on the monarchy and in particular on the image of Prince Charles and Camilla whose relationship in the 1980s has been falsely depicted in the TV show.

Ms Bedell said: “I am very sad to say that I have heard it over, over and over again that people take The Crown at face value and they believe everything they see in the series, and that includes Charles and Camilla.

“The notion in the programme that he entered into his marriage cynically with a view to continuing with Camilla and putting his new wife on the side is exceedingly dishonest and damaging. It is just simply not true.”

He told The Mail on Sunday: “That is not the Prince Charles I knew.“Please, please God, people, do not think that this is an accurate portrayal of the heir to the throne.”