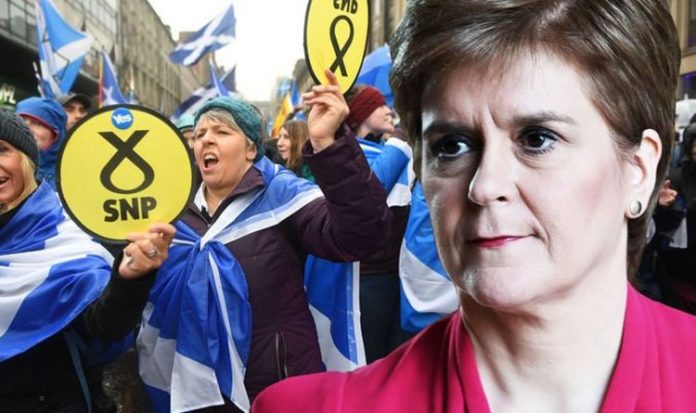 Kenny MacAskill urged Nicola Sturgeon’s government to “break out” and promote a “different line” from the UK Government as he pushed his desperate campaign to rip up the Union. He said the move would be part of diplomatic efforts to push countries around the world to recognise Scotland’s right to determine its own future.

Mr MacAskill told the National: “They should be breaking out.

“We are promoting a different line from the UK Government,” when he was quizzed over the Scottish Government’s office in Washington being inside the British Embassy.

Mr MacAskill said Scotland should follow the diplomatic mission by Quebec which has established a “délégation du Québec dans le monde” – a set of about 30 consulates in 18 major cities around the world.

He said the presence would be a way for Scotland’s position on independence to be “narrated and promoted”.

Mr MacAskill said: “Quebec already has outposts abroad as we have with Scottish Development International. We need more and need them beefed up.

“Fiona Hyslop is doing that but it should be done quicker and faster and also ensure that the Scottish Government political position is narrated and promoted not just trade.

It comes amid reports the SNP could be poised to ignore a Westminster veto on a second referendum on Scottish independence.

The SNP’s party conference takes place this week amid growing support for Scottish independence and ongoing rows over devolution with Westminster after Prime Minister recently described devolution as a “disaster”.

He later clarified his comments, claiming that he was referring to “the way the SNP have handled devolution in Scotland”.

But in signs the SNP could be set to defy the UK government, a motion approved for debate which has been included in the draft agenda for Ms Sturgeon’s annual conference says the Nationalists ”will not accept a Westminster veto” on a second vote.

The resolution does not set out what the party would do if the Prime Minister continues to refuse a new vote but it does open the prospect of further action being taken.

It has been branded ‘Plan B’, and could see the Scottish government take on Westminster in the courts if it cannot get the Prime Minister’s consent for a second vote.

Scotland had an independence referendum in 2014, in which 55 percent voted to stay in the union.

While the vote was branded a “once in a generation” chance to leave the UK, the SNP has used Brexit after Scotland voted 63 percent to remain in the EU in 2016 to bang the drum for independence.