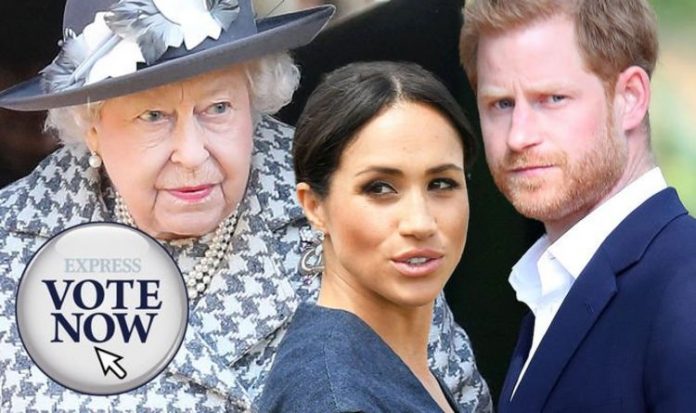 Despite stepping back as senior royals, Harry and Meghan still kept their royal dukedoms, although they agreed not to use their His/Her Royal Highness prefixes. It was also agreed during exit discussions earlier this year that Harry would not be stripped of his honorary titles but would also not use them. Amid constant scrutiny, the pair sparked controversy when they visited a cemetery in Los Angeles to lay a wreath to mark Armistice Day.

The move caused controversy with some labelling it as a publicity stunt, with many royal fans demanding the Queen step in.

When the review is taken in March next year, do you think the Queen should strip Meghan and Harry of their titles?

Ahead of Armistice Day, Harry had requested a wreath be laid on his behalf during the processions around the Cenotaph on Sunday.

His request was rejected, however, leading to some, including ITV’s Good Morning Britain host Piers Morgan, to claim the move was a publicity stunt.

Commenting on the incident, one Twitter user said: “Meghan and Harry should have dropped their titles the minute they started to complain about the Royal Family.

“They are using the titles to gain followers and fame.”

Another person lashed out at the couple and said: “What the hell does it take to strip the titles, the money and the perks and say take your abnormal need for attention while selling clothes at the expense of dead servicemen and women and leave.

“Someone else simply said they are fed up of hearing about the couple and urged them to be stripped of “all titles and let them be on their own.”

JUST IN: Queen ‘to be front of queue’ for Covid vaccine say This Morning panel

He also told Express.co.uk: “Harry will remain the Duke of Sussex, I don’t think there is any doubt of that.

“And he will, they both will be back for ceremonial things in this country.”

The review into their royal departure will be conducted before the end of March next year.

Since deciding to step back as senior royals, Harry and Meghan moved to Los Angeles to begin their new lives.

One of the priorities for the pair was to become more financially independent as part of their new lives.

Since their departure, Meghan and Harry have founded a new production company and have signed a multi-year deal with Netflix.