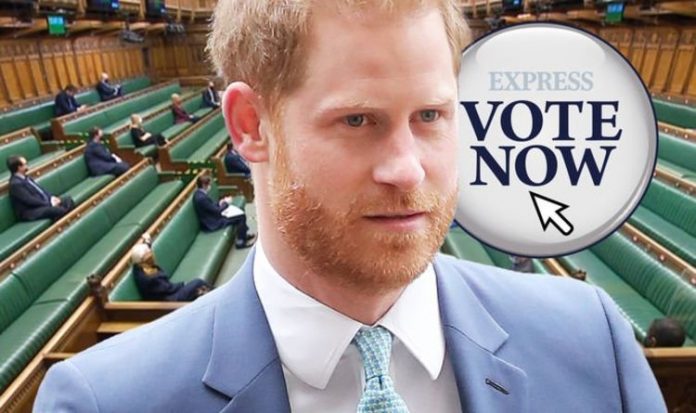 Two leading royal experts have called for the Duke of Sussex to either step away or be removed from his position as sixth-in-line of succession to the throne. Royal commentator Robert Jobson believes leaving non-working royals so high up in the line of succession risks sparking a constitutional crisis.

And royal author Hugo Vickers has stated the new post-royal life chosen by the Duke and Duchess of Sussex is “incompatible” with the one of a working royal who could eventually end up on the throne.

While Prince Harry could express his desire to renounce to his position, changes to the line of succession are not up to him or the Queen but can only be carried out by Parliament, an expert has noted.

Professor Robert Hazell, from UCL’s Constitution Unit, told Yahoo: “The line of succession is laid down in law, most recently the Succession to the Crown Act 2013, which abolished the rule of male primogeniture and introduced gender equality.

“The Queen has no power to change the line of succession.

Should Parliament remove Prince Harry from the line of succession? (Image: GETTY)

Prince Harry is no longer Captain-General of the Royal Marines (Image: GETTY)

“So if Harry were to be removed from the line of succession, it would require legislation through an Act of Parliament.”

The most recent constitutional crisis sparked by a member of the Royal Family dates back to December 1936.

Then, King Edward VIII decided to give up the throne to marry his lover, American socialite Wallis Simpson.

The crisis stemmed from a personal decision, but needed an act of Parliament to sanction a critical change in the line of succession, which put King George VI – the father of Queen Elizabeth II – on the throne.

Edward VIII signed his declaration of abdication on December 10 1936.

Both Houses in Parliament passed the His Majesty’s Declaration of Abdication Act on the following day without any amendments.

Prince Harry and Meghan Markle have stepped down as senior royals (Image: GETTY)

The other 15 realms which consider the British monarch their head of state also had to sanction the abdication act in their parliaments.

As noted by Professor Hazell, the Houses of Parliament modified the rules of succession in 2013, when they approved an act replacing male-preference primogeniture with absolute primogeniture.

According to Mr Vickers, Prince Harry can no longer fully support his royal titles after settling down in California.

And, he added, from there the Duke can do “little for his nation in comparison with” other full-time working senior royals.

Writing in the Daily Mail, he continued: “That is why I now believe Harry must take one step further still and do the only honourable thing in the circumstances: offer to step aside from the line of succession.

“As the sixth in line to the throne, it would take a catastrophic turn of events for him to be called upon as King.

Mr Jobson, on the other hand, spoke with alarm about the risks of having non-working royals such as Prince Andrew and Prince Harry located so prominently in the line of succession.

He told BBC Breakfast: “You’ve got to remember that, in this COVID pandemic, that we’re only a couple of breaths away from a constitutional crisis.