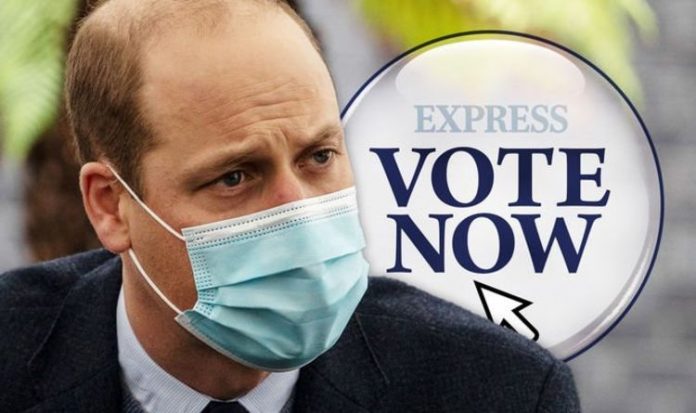 The father-of-three tested positive for coronavirus in April, but decided to keep it a secret as to not cause alarm across the nation, it has emerged. William, 38, continued with his telephone and video engagements and even told one observer he had not wanted to worry anyone.

However since the news emerged, Prince William and his aides are now facing backlash for showing “poor judgement”.

Epress.co.uk is asking was Prince William right to hide his diagnosis?

Prince William said he did not tell anyone about his positive test result because “there were important things going on and I didn’t want to worry anyone” and he was “determined it should be business as usual”, according to .

He was reportedly treated by palace doctors and followed Government guidelines by isolating at the family home Anmer Hall, in Norfolk, carrying out 14 telephone and video call engagements during April.

It was unclear last night why Kensington Palace would have kept secret a positive test by William, as information about his father Prince Charle’s diagnosis was released.

When contacted, Kensington Palace declined to comment on the reports.

“This has created a serious issue of trust.”If the Palace is prepared to LIE about an issue as serious as Prince William, second in line to the throne, contracting COVID-19 what else have they LIED about when questioned by the press and why should the media believe any denials going forward?

The Daily Express royal correspondent Richard Palmer made a comparison between Prince William’s decision to hide his diagnosis with the transparency required by world leaders.

He said: “This may be a cover-up that will haunt William and those advising him.

“If the future King contracts a potentially fatal virus that the entire world is worried about during a lockdown and he and those around him cover it up, that raises serious questions about whether we can trust anything he or his advisers say.

“If Boris Johnson, Keir Starmer, Emmanuel Macron, Angela Merkel, Donald Trump, or Joe Biden had covered up a positive test for COVID-19, many people would not be praising them for ‘not wanting to worry people’.”

The fact Prince William continued with his engagements suggests any symptoms would have been mild.

While future King Prince Charles quarantined with mild symptoms separately from the Duchess of Cornwall – who tested negative and self-isolated for 14 days – and worked throughout at the couple’s Scottish retreat Birkhall in Aberdeenshire.

In his first public engagement after recovering from mild symptoms, Prince Charles revealed he lost his sense of taste and smell when he hadcoronavirus.

He spoke of his personal experience with COVID-19 when he met frontline NHS staff and key workers in person with Camilla in mid-June.