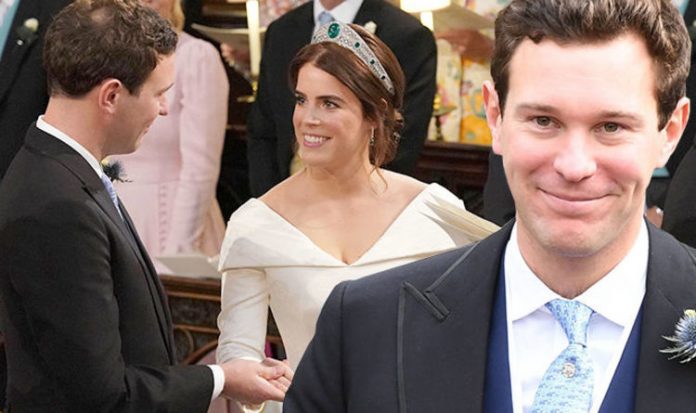 The groom, 32, took off his glasses to wipe his eyes as he waited in St George’s Chapel to say ‘I do’ to his 28-year-old bride.

And he looked red-eyed as Princess Eugenie walked down to aisle to meet him in her stunning white Peter Pilotto wedding dress.

Mr Brooksbank looked emotional as he stood next to his younger brother and best man, Thomas Brooksbank.

He appeared to say “oh my heart, oh break my heart” as Eugenie walked up to him to exchange vows.

Thousands offans have made their way to the small city to celebrate the couple’s marriage while 1,200 were  the castle’s grounds to catch a glimpse of the newlyweds – as well as those on the star-studded guest list.

The secondwedding of the year took place at St George’s Chapel – the same place Prince Harry and Meghan Markle tied the knot in May – before they take a short carriage ride through the streets of Windsor.

The happy couple were then be the guests of honour at two receptions, the first of which was hosted by the Queen inside Windsor Castle.

The evening reception will be a black-tie outdoor celebration at theLodge in Windsor, home to Eugenie’s father Prince Andrew.

Jack Brooksbank has previously said he is “a little bit nervous” about his wedding.

He told the Daily Mail: “I’ll need to take a few minutes for myself before the speeches, because I’m terrified. It’s very exciting, but I’m a little bit nervous.”

Mr Brooksbank first met Princess Eugenie, who is ninth in line to the throne, while on a skiing trip in the Swiss resort of Verbier eight years ago.

He told the BBC it was “love at first sight”.

Princess Eugenie looks at Jack Brooksbank as she arrives for thewedding (Image:FAMILY)

Jack Brooksbank took off his glasses as he appeared to cry at thewedding (Image:FAMILY)

He popped the question while the pair were on holiday in Nicaragua and their engagement was made official on January 22 after seven years of dating.

Guests arrived at St George’s Chapel in Windsor this morning for Eugenie and Jack’sWedding.

Princess Eugenie and Jack looked lovingly at each other during the ceremony (Image: PA)

Eugenie and Jack walked down the steps of St George’s Chapel (Image: EPA)

A total of 1,200 members of the public were also invited to watch the riveting ceremony.

Eugenie turned heads as she walked down the aisle of St George’s Chapel, wearing a stunning ivory gown designed by Peter Pilotto and Christopher De Vos.

She topped off her outfit with a dazzling tiara made for Mrs Greville in 1919, and passed on to Queen Elizabeth in 1942.

Eugenie paired up her tiara with matching emerald drop-earings, a wedding gift from her husband, Jack.

Eugenie and Jack shared their first kiss as husband and wife (Image: AFP/Getty)

He was seen fiddling with Eugenie’s right hand after they exchanged rings, in a loving display of affection.

Following the ceremony, the pair shared their first kiss on the steps of St George’s Chapel, asfans cheered them on.