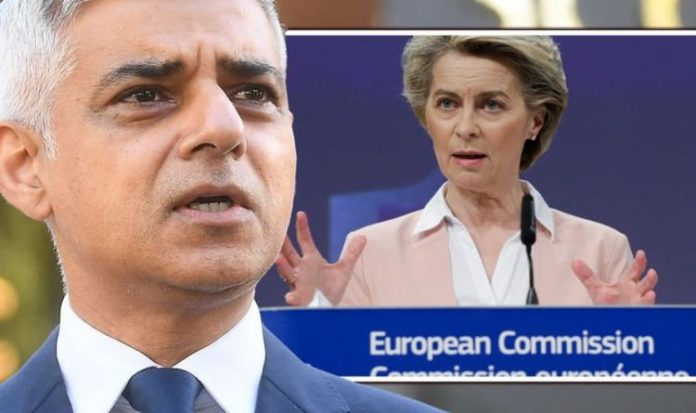 Members of the Labour Party who attempted to steer the UK back into the EU in the four years after the referendum should start “thinking a little bit” about their actions, Paul Embery, a leading trade unionist and Labour member told Express.co.uk. Almost all of the Opposition party backed Remain, one factor in a string of disasters that led to Labour’s devastating defeat in the 2019 general election, its worst performance in a ballot since 1935. Scores of once considered Labour safe seats fell to Prime Minister Boris Johnson’s Conservative Party, many like Bishop in Auckland for the first time.

A large part of these were in the so-called Red Wall – a band of working-class constituencies in the north of England – who largely voted to leave the EU.

Despite the heavy defeat, and what Mr Embery said was the obvious reason for it, figures in the Labour Party continued to back Remain, with many even going on to defy their new leader, Sir Keir Starmer, when he whipped the party to support Mr Johnson’s Brexit deal in December.

Sadiq Khan became particularly known to the public for his insistence that the UK should have extended the transition period.

The Prime Minister refused his call to request that the Brexit trade deal talks be taken into 2021.

Sadiq Khan: The London Mayor, among others, was called on to ‘think a bit’ about his EU stance (Image: GETTY)

Before that, Mr Khan, who has served as Mayor of London since 2016, called for a “People’s Vote” on any deal secured by the Government.

In 2018, he told the Andrew Marr Show that: “There should be a choice by the deal done by this Government, or staying in the EU.”

Mr Khan was not alone in what Mr Embery describes as a “fanatically pro-Remain” group of party politicians.

Peter Dowd, the Labour MP for Bootle which voted to Leave the EU, in 2017 appeared on the BBC’s Daily Politics and insisted that his constituency had not voted to Leave.

Mr Embery said it was people like this, and other Remain figures in Labour, that must now relinquish their loyalty to the bloc and European Commission President Ursula von der Leyen’s vision of an integrated Europe, should they want Labour to win back those lost voters and power in Westminster.

Peter Dowd: The Bootle MP (left) refused to accept that his constituency voted to leave the EU (Image: GETTY)

Talking about how the UK must now pursue more state aid enterprises since leaving Brussels, Mr Embery said: “That has to be the long-term goal.

“Obviously the trade and cooperation agreement has been written in a way where it’s not necessarily easy to do that, but nonetheless it is easier than when we were part of the EU.

“I’ve always found it weird that people on the Left who are pro-EU seem to have no issues with the EU’s restrictions on state aid and the demands for a level playing field.

“It should be a first principle for any person on the Left, that you don’t leave everything to market forces, that you have a Government that’s willing to intervene in the economy to support British industry.

“Anyone on the Left who doesn’t see that that was hindered by the EU needs to examine their thinking a little bit.”

Today, Sir Keir announced Labour’s “British Recovery Bond” scheme that would give millions of millions of savers around the country a chance to invest in the UK’s recovery from the coronavirus pandemic.

It comes ahead of the Government’s March budget.

Sir Keir stressed these would especially be made available for areas outside the South East, one in a range of new efforts to appeal to working-class voters and those outside of London.

Keir Starmer: The Labour leader has flip-flopped on his Brexit policy over the years (Image: Express Newspapers)

The Conservative Party said Sir Keir had stolen much of his plans from them, according to the BBC.

Labour has also announced plans to open a “constitutional commission” and spread devolution to all corners of the UK.

The scheme is largely regarded as being aimed at Scotland, which is hoping to break away from the UK after May’s Holyrood elections, if the Scottish National Party (SNP) wins a majority.

While Sir Keir is pulling out all the stops to put Labour on top, Robert Tombs, the renowned British historian, told Express.co.uk that he faces an almost impossible task.

He said: “Whether Labour wins back those Red Wall voters very largely depends on how successful the Johnson government is in keeping those voters.