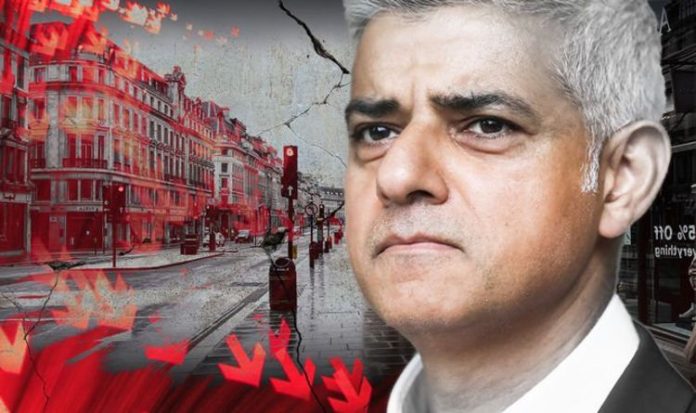 Top Chefs and restauranteurs from across the capital HAVE signed an open letter to the city’s mayor asking him to come out of his “bunker” and assist the economy recovery. Signatories of the letter included St John’s co-founder Trevor Gulliver, Angela Hartnett, and D&D London’s David Loewi. The letter says: “Leave the bunker, rise to the challenge, let the world and the suburbs and the home counties see that we are getting ready to welcome back all and will impose the necessary practices to make the environment as safe as we can.”

Mr Gulliver has warned his industry could take at least three years to recover from lockdown unless there is additional help by London’s mayoral office.

Speaking to City AM, he said: “It is going to be a disaster for some businesses.”

The latest consumer data shows that retail footfall across the UK as a whole had risen by 3.8 percent last week.

But, the rise was not as pronounced in Greater London, where there was only an increase of 1.8 percent.

Consumer data analysts Springboard said there was “insufficient and inadequate” support for the food and drinks industry in the capital.

Mr Khan said it was now an “urgent priority” to get restaurants and bars back up and running.

The mayor said: “If more people aren’t confident the virus is under control, our wonderful ecosystem of shops, bars, cafes, and cultural venues is at risk of a damaging slump that could take years to recover from.”

The events and entertainment industry in the capital are now on the verge of collapse.

Many analysts have said the cautious attitude taken by policymakers is leading the UK into further recession.

A recent study by Morgan Stanley found that last week only one-third of British office workers were back at their desks, further decreasing footfall on high streets.

Many cafes, sandwich shops, bars, newsagents, and taxi drivers rely on the daily tread of the workforce through the city.

WHSmith announced that it was about to make 1,500 staff redundant.

Last month, Pret a Manger said it would have to close 30 shops.