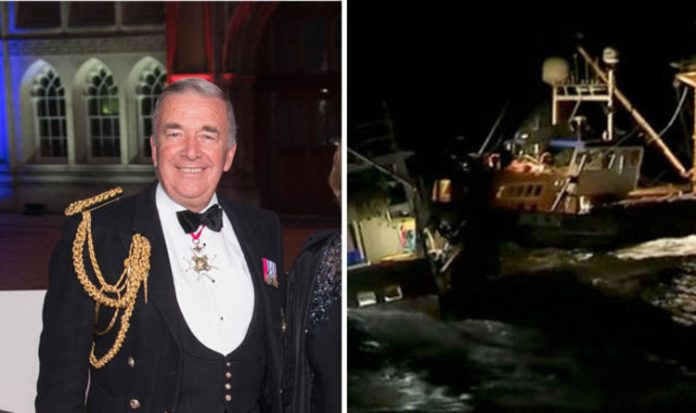 Labour’s Lord West of Spithead said the UK has “insufficient ships” to patrol its waters and it will have “disastrous” consequences post-Brexit.

Mr West said: “It is clear that we have insufficient ships to patrol the United Kingdom’s territorial seas and our Exclusive Economic Zone (EEZ).

“Co-ordination of the few ships we do have is fragmented.

“In theory, co-ordination is exercised by the co-located Joint Maritime Operations Command Centre.

“But this command centre lacks a single commander with authority to order government departments to take action, and therefore is unable to exercise proper command.”

It comes after clashes between British and French fisherman over scallops erupted this week.

Five UK vessels were surrounded by as many as 40 French boats on Tuesday night and were forced to ram their way out of the blockade after maritime flares, smoke bombs and rocks were hurled at them.

Mr West said that the “scallop wars” demonstrate how Britain cannot protect its waters and that after Britain leaves the European Union it will be responsible for patrolling its EEZ.

In a letter to The Daily Telegraph he added: “The current difficulties with the French over scallops do highlight one important issue.

“It is quite clear, to experts and laymen alike, that we have insufficient ships to patrol and act in United Kingdom territorial seas and our Exclusive Economic Zone. Coordination of the few we have is fragmented.”

“After Brexit, this will be disastrous.”

This long-running dispute centre on on France’s environmental laws which state French vessels can only fish for scallops from October to May while their British rivals face no such restrictions.

French fishermen say they support the legislation to protect the valuable scallop stocks but cannot accept British fishermen are allowed to operate all year round and accuses them of depleting a vital natural resource for everyone.

The scallop-rich waters of the Baie-de-Seine are a sore point of tension on what Britain and French fisherman can do there.

French authorities try to preserve scallop stocks by banning their ships from rising in the region during the summer months, which ends on October 1.

This law doesn’t apply to the British and they harvest scallops during this window, which angers the French.

The EU’s Common Fisheries Policy allows any member state, providing it has a registered fleet and currently it includes Britain, “equal access” to EU waters that are more than 12 nautical miles off the shore of other countries.

The Baie-de-Seine stretches from the coast of Normandy to beyond the 12 nautical miles, allowing British boats to access it.

After Tuesday night’s “scallop wars” British fishermen are now taking a safety-in-numbers approach in response and hope to send 40 UK scallop trawlers back to the waters of Baie-de-Seine to continue fishing there.

Skipper Brian Whittington, 40, said he would not be deterred despite coming under attack in the Channel.

He said: “We’ll go over there with the big boats this time and stick together. I heard the French won’t do it again, but I don’t believe it. They’ll do anything.”