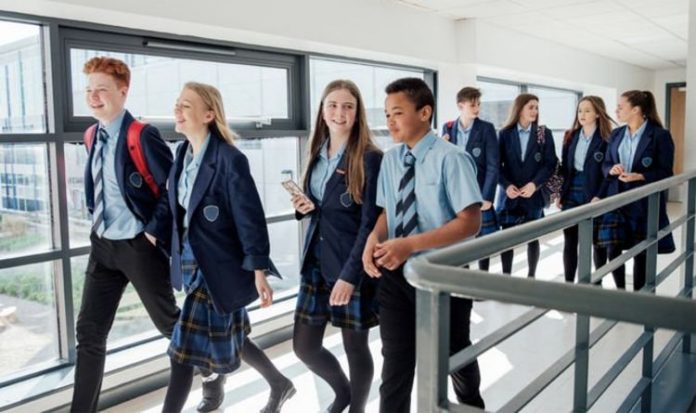 Exam-year students will go back to school as normal after the Christmas holidays, but the majority of secondary school pupils will start the term online. It is hoped the staggered return will allow headteachers to roll out mass testing of children and staff in the new year. Primary school pupils will go back to school as normal in January, alongside students in exam years, vulnerable pupils and key workers’ children.

Education Secretary Gavin Williamson is due to make a written ministerial statement on Thursday.

It comes after he threatened legal action against Greenwich council earlier this week after it advised schools to switch to remote learning for most pupils on the last week of term.

Council leaders in Waltham Forest and Islington – who had also advised schools to move to online learning for the last few days of term amid rising coronavirus rates – were told to retract their advice.

The Prime Minister’s official spokesman said: “The start of the term won’t be delayed but what we are doing is asking secondary schools and colleges to operate a staggered return supported by full-time remote education during the first week of term, with in-person teaching in full starting on January 11.”

Speaking to the Public Accounts Committee (PAC), Susan Acland-Hood, permanent secretary at the Department for Education, said there were no “plans to lengthen the Christmas holiday”.

But she told MPs on Thursday morning that discussions were under way about how pupils would go back in January.

Meg Hillier, chairwoman of the PAC, said it was “ludicrous” that parents and schools still did not know, on the final day of term for many schools in England, what was happening on the week commencing January 4.

Speaking about events in London this week, Ms Hillier said parents have had “very confusing messages” from Government and local authorities.

She said: “So it’s just a complete dog’s breakfast out there. Parents don’t know from day to day whether their child is going to be in school, partly because of Covid, but then this layered on top is unacceptable, surely?”

Labour leader Sir Keir Starmer told reporters: “I think schools are going to be really frustrated this has come at the last moment.

“What we needed for schools was a plan that started last September and what we have had is one problem after another all through to the Christmas period.”

Mary Bousted, joint general secretary of the National Education Union (NEU), said the Government’s announcement on the last day of term demonstrated “ministerial panic rather than rational and responsible action” in response to the rise in Covid-19 rates among pupils.

She added: “The presence of year 11 and 13 pupils on the school site at the same time as the testing arrangements and procedures are being put in place will be extremely problematic.

“It is highly likely that these pupils will return from their Christmas holiday with higher levels of Covid-19 infection.

“Those who test positive will be required to isolate, which involves a huge amount of school staff taking the time to contact parents and to trace close contacts.”

It came as figures suggested more than half of a small sample of schools surveyed in England had at least one Covid-19 infection last month.

Of the 105 schools in the survey, 1.24% of pupils and 1.29% of staff tested positive for Covid-19 between November 3 and 19, according to the Office for National Statistics.