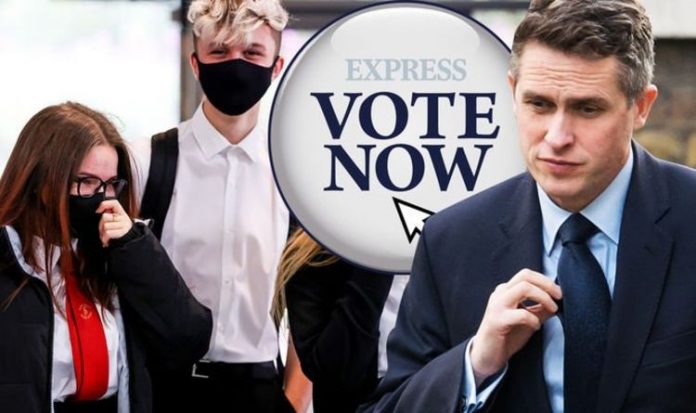 Just days before children head back to school, Education Secretary Gavin Williamson announced secondary pupils will now be ordered to wear face coverings in the communal areas of schools in all local lockdown areas of England and if their headteachers demand it. The eleventh hour U-turn comes after Mr Williamson insisted measures being adopted by schools to limit the spread of coronavirus meant masks were not required and a Number 10 spokesman had said there were no plans to review the guidance.

Express.co.uk is asking you do you think masks should be worn by children in schools?

In another government policy U-turn, the Department for Education (DfE) said in areas under local restrictions, face coverings should be worn when moving around corridors and communal areas.

The new guidance came after pressure from teaching unions and followed Scotland’s announcement secondary pupils there will be required to wear face coverings in between lessons.

It is the latest U-turn by Prime Minister Boris Johnson’s government which has come under fire for its handling of the pandemic and is under pressure to ensure all England’s pupils return to school after a debacle over exam grades earlier this month.

School children will have to wear a mask in school (Image: GETTY )

in areas under local restrictions, face coverings should be worn when moving around corridors and communal areas (Image: GETTY )

Quizzed about public confidence following the U-turn, the Education Secretary told Nick Ferrari on LBC: “At everystage, what we’re focused on is making sure all children return back to school in September.

“We don’t want to be seeing children wearing masks in schools up and down the country, but in certain areas where it’s necessary, where we’re in local lockdown.

“This has been typical at every stage of this crisis that we have taken a cautious and careful approach welcoming children back to schools. I think that’s what people expect and that’s what we’re doing in this instance.

“We’ve seen the move welcomed by unions in terms of clarity that it brings, because there was some concern in the teaching community, quite understandably, when they saw the advice come out from the World Health Organisation.”

Gavin Williamson has U-turned on the face mask policy in schools (Image: PA)

But not everyone was in support of children being forced to wear masks at school.

“Masks should be banned in schools. The country should be getting back to normal not pandering to this scientifically illiterate guff.”

And Tory MP Huw Merriman posted: “This corridor gesture had better not be true.

The change follows the World Health Organisation (WHO) advice that children aged over 12 should wear masks (Image: PA)

The DfE said masks will not need to be worn in classrooms (Image: PA)

“Will just lead to calls for use in the classroom and then we further downgrade the learning environment.

“Like every other risk in our daily lives, we need to embed COVID and proportionately live with it.”

Face coverings will not be recommended in English schools more widely but secondaries will have the discretion to require them to be worn by staff and children in Year 7 and above in communal areas.

The DfE said masks will not need to be worn in classrooms, because other protective measures will already be in place and they might affect learning.

The change follows the World Health Organisation (WHO) advice that children aged over 12 should wear masks.

Full guidance has not yet been published, but is expected “shortly” the department said and will come into effect from September 1.

In a warning that advice could change again, the DfE said stricter guidance could be issued for schools nationally if the rate of transmission increases across the country.

The advice will also apply to further education colleges and will be reflected in guidance to universities.

But it will not apply in primary schools because the risks to children in those settings are lower.

Full guidance has not yet been published, but is expected “shortly” (Image: GETTY )

While it has largely been welcomed, Labour described it as a “half baked U-turn”, arguing that masks should have been made compulsory in communal areas and that the buck had been passed back to schools.

Mayor of London Sadiq Khan criticised the Tories for appearing only to make the decision following pressure.

He wrote on Twitter: “Our children must be able to return to school in a safe environment and I welcome the latest u-turn by the Govt – a step in the right direction.

“However, it is of huge concern that yet again the PM has had to be forced into following the advice of public health officials.”