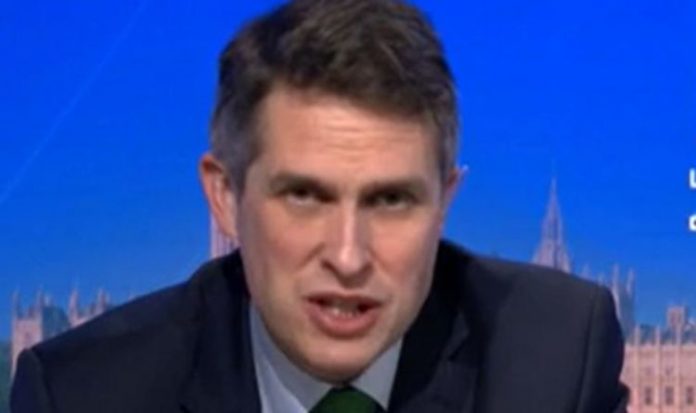 Gavin Williamson has been questioned over what would happen if parents refused to send their children back to school due to coronavirus concerns. Typically a parent can be prosecuted if a child has unauthorised absence from school, although they normally receive warnings and offers of help from the local council first. LBC host Andrew Castle confronted the Education Secretary on the point, citing a listener who explained that her daughter’s rural Norfolk primary school had suffered a mass coronavirus outbreak over Christmas but was still expected to return on January 4.

Mr Williamson said: “We’re always working with schools because right across the country schools, whether it’s in Norfolk or Staffordshire, have all had to deal with this.

“Schools have sometimes had to take an extra couple of days in order to get ready.

“But we’ve seen 99 percent of schools open all the way through from the summer.”

Mr Castle interjected: “But this listener doesn’t feel comfortable sending her 10-year-old to school in circumstances like that even if the school does open.”

He asked: “You’re not going to go around prosecuting people for that, are you?”

Mr Williamson insisted that schools are an “incredibly safe space” to which the LBC presenter shot back that the one he had just cited didn’t appear to be.

The Education Secretary continued: “Children benefit incredibly from being in school, and school is mandatory.”

Mr Castle shot back: “Yes, school is mandatory, but you’re not going to go around prosecuting people if they make their own decision in a situation like this not to send their 10 or 11-year-old to school, are you?”

The Department of Education stated previously that parents will be fined for non-attendance, unless there is “good reason” that they cannot attend school.

Currently the fines imposed by local authorities can start at £60 and rise to £120 if the fine is not paid.

Paul Whiteman, the General Secretary of the National Association of Head Teachers union, has already expressed concern about the return to education.

He told Sky News: “Schools should not reopen until we’re ready to do so. We were talking to Government about three weeks before the end of term, and telling them to make the decision then about a later opening so that we could plan an orderly return.

“Yet again the Government makes a decision at the very last minute when there’s no time to plan and no time to react to that decision.”