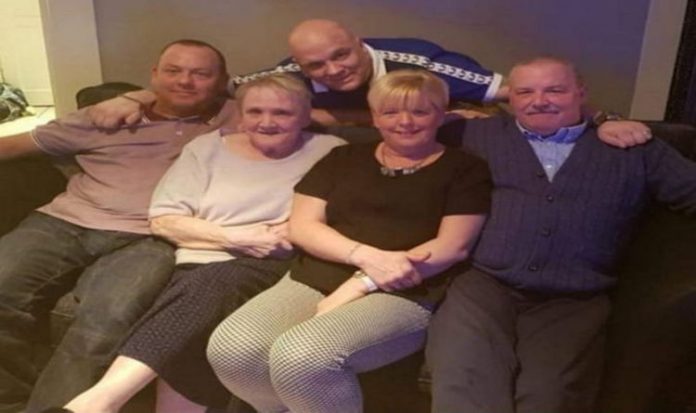 Lynn Barrie’s 78 year old mother, Maureen Paterson, was admitted to University Hospital Wishaw on December 16 after suffering from various cognitive issues. She died last week. During her time in hospital, her stoma bag was incorrectly fitted, she contracted Covid and broke her hip. One time when the family went to visit, Maureen was found lying in her room on just a mattress with no ability to go to the toilet.

Lynn told the Daily Record: “When mum was admitted we asked if she could have one-to-one care as she was very frail and if she fell she would break her hip, but they stopped that.”

On New Year’s Eve, Maureen phoned her daughter and told her that her stoma bags had broken several times and the nurses had been sticking them on with surgical tape. When questioned, the staff said they did not have any more bags in the hospital so Maureen’s granddaughter, Leanne, had to take some herself.

Lynn also claims that her mother was not given her asthma inhalers for three days and then later contracted Covid: “She was moved to a single room in the Covid ward and we warned staff again that she is very frail, unsteady on her feet and at a serious risk of falling.”

When the family called the hospital on January 28 for an update, they were informed that she had fallen and broken her hip: “One family member had been told the fall happened at a particular time and we were told another. This leads me to believe they have no idea when she fell and how long she was lying there.

“Myself and my daughter went to see her and she was lying in her room on a mattress on the floor. I could not believe it that she had not even been put into a bed.

“There was no means for mum to go to the toilet as she had no catheter or a urinary pad. We were advised by the staff that they were intending on using a bedpan on mum whilst her hip was broken.”

The family were then told that to repair Mrs Paterson’s hip they would need to operate or she would die. However, the surgery itself was not without risk and could also result in death.

On February 1, doctors notified the family that Mrs Paterson was nearing the end of her life. She died four days later.

“We are well aware of the great nurses and staff at Wishaw that go above and beyond for their patients, but in this instance, the staff have failed in their duty of care to my mum.”

Anne Leitch, chief nurse at the hospital told the Daily Record: “We would like to convey our deepest sympathy to the family and our thoughts are with them at this difficult time. We aim to provide the highest standard of care to all our patients and we regret any instance where someone feels we have not met this standard.

“NHS Lanarkshire is managing a complaint through our formal complaints process and we will respond directly to the family.”

Express.co.uk has contacted NHS Lanarkshire for a response.