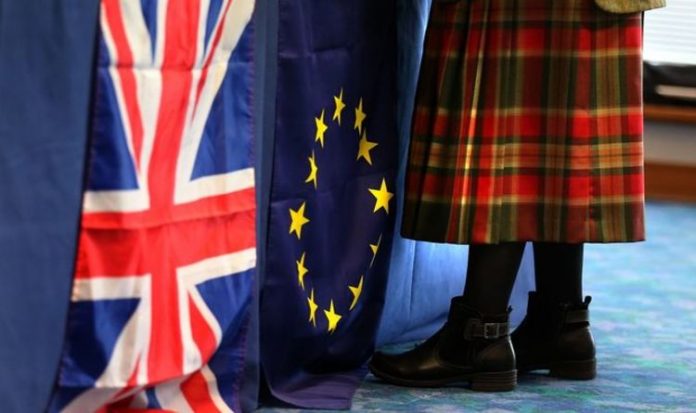 John McTernan – who served as Mr Blair’s director of political operations from 2005 to 2007 – argued Scotland needs to fly the Union Jack on all UK Government spending. He compared it to how the EU put their flag on “every bit of infrastructure” they have had any input with.

Mr McTernan said: “The flag in Scotland should be stuck onto every single piece of Government spending.

“You know the way the European Union put their flag with the circle of stars on it on every bit of infrastructure spending that they had any element in directing?

“We need to show that flow.”

Mr McTernan went on to add how the use of the Union flag in the televised speechs by Boris Johnson and Sir Keir Starmer was “strange” and American.

“There’s something very, very strange about this American importation.”

Kerry Perrior, a former adviser to Theresa May, also revealed how the former Prime Minister called for Union flags to be more visible.

She told Mr McTernan: “I agree with that position and I tried to advocate for that when I was at Number 10.

Ms Perrior added how it was a “bit weird” and reiterated Mr Ternan’s claims it was “very American”.

She continued: “I also think it’s kind of a stolen thing from America, it’s very American.

“This kind of behaviour.

“Because if you’re standing in front of a lectern at an official event fair enough, if you’re meeting a foreign leader absolutely.

“If you’re in your bedroom with your family downstairs…”

This comes after Labour leader Sir Keir Starmer was asked about his frequent use of the Union Jack flag while appearing on LBC.

Sir Keir said: “I don’t have any problem at all with the Union Jack, when I do my addresses to the nation and my press conferences we do have the flag because it’s the flag of the United Kingdom.

“Also I’m patriotic and I’m very comfortable with that, I don’t have any problem with that. “