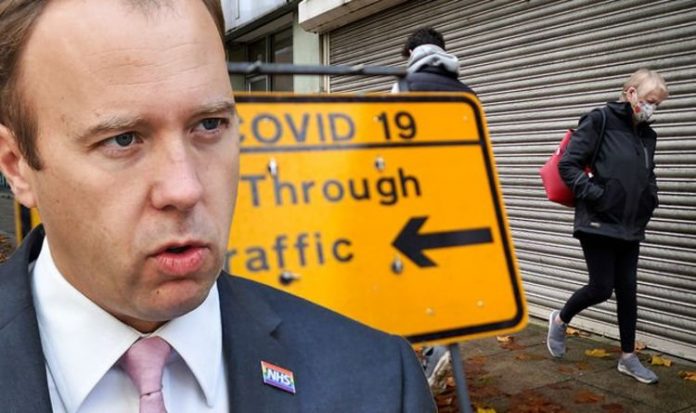 On Tuesday the UK recorded its highest number of COVID-related deaths since May, sparking concerns localised lockdowns were not enough to stem the spread of the killer disease. Asked if a circuit-breaker lockdown is on the cards for England, Environment Secretary George Eustice said ministers could not rule out a short-term nationwide shutdown, which has been implemented in Wales.

His warning comes as Sage scientists including chief scientific adviser Sir Patrick Vallance pressure the Government to roll out stricter lockdown rules that apply across the country.

The experts predict the second wave will last longer than the first but have a lower daily death toll that the country experienced in spring.

The group are urging Boris Johnson to impose a second lockdown until mid-December.

Speaking to Sky News on Wednesday morning, Mr Eustice said ministers are closely examining the rising number of infections and fatalities and would take action accordingly.

He said: “We know that mortality, very sadly, tends to follow those spikes in incidents by a number of weeks.

“It may be that we’ve started to see that yesterday.

“We are monitoring it very closely, we are concerned.

“That’s why we continue to introduce new restrictions where that’s necessary including for instance in Warrington yesterday.”

READ MORE: When your tiredness could be a sign of COVID infection

“We have to monitor things very closely. That’s why we can never rule anything out but we think we’ve got the right approach for now.”

Sage is warning the second coronavirus wave could bring 500 deaths a day by the end of November, and predict 25,000 COVID-positive patients could be in hospital.

Scientists say every part of the country should be under Tier 3 restrictions, which include the closure of pubs, betting shops and casinos.

A source told The Telegraph: “It’s going to be worse this time, more deaths.

“That is the projection that has been put in front of the Prime Minister, and he is now being put under a lot of pressure to lock down again.”

The warning about a second national lockdown comes as the UK recorded 357 coronavirus deaths on Tuesday.

This brought the overall death toll past 60,000.

On Wednesday Liberal Democrat leader Sir Ed Davey jumped on the second lockdown bandwagon, saying: “My view at the moment follows what the experts have said, namely that we need a national circuit breaker.”