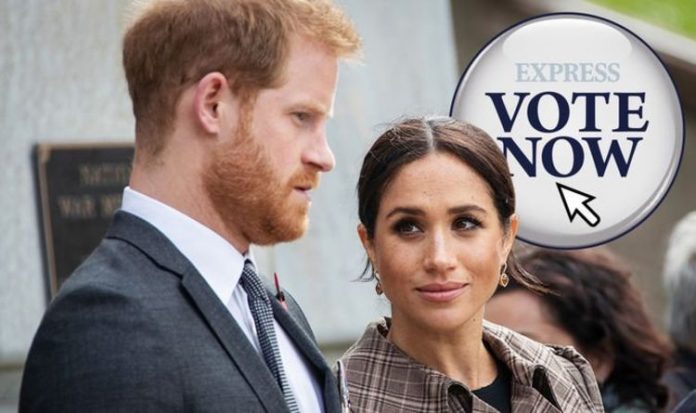 The Duke and Duchess’s appearance with the famous broadcaster goes out on March 7, just a few weeks from the one-year anniversary of the couple ending their roles as senior royals. Harry’s forces appointments – Captain General of the Royal Marines, Honorary Air Force Commandant of the Royal Air Force Base Honington, and Honorary Commodore-in-Chief of the Royal Naval Commands’ Small Ships and Diving – were put on hold for a year after Megxit, and he is not currently allowed to take on any roles using them. He also holds patronages with the Rugby Football Union, the London Marathon and the Rugby Football League.

The Queen is expected to review Harry’s honorary military titles before the Megxit anniversary and could force the pair to to give up their their links to any organisations passed down through the royal family.

Palace insiders have suggested there will be no way back to royal life once the interview is broadcast.

The sources said the couple agreed to the televised chat because they could “see the direction of travel” of their future royal roles.

There are also fears the decision to speak publicly and the information revealed during the interview could widen the divisions between Harry and his brother the Duke of Cambridge, who are known to have a troubled relationship.

In the months leading up to Meghan and Harry’s decision to stand down and become financially independent, the rift in the royal family was laid bare when Harry admitted he and William were on “different paths” and have good and bad days in their relationship.

The interview will be staged in two parts, with the duchess – who announced on Sunday she is expecting her second child – being interviewed about “stepping into life as a royal, marriage, motherhood to how she is handling life under intense public pressure”.

Later, they will be joined by Harry and the couple will speak about their move to the United States last year and their future plans.

Ms Winfrey is a personal friend of Meghan and attended the royal wedding in Windsor in May 2018 and there was speculation at the time the couple were likely to be interviewed by the celebrity at some stage.

The global chat show star has welcomed everyone from Tom Cruise and Madonna to former president Barack Obama to sit down and discuss their lives.

CBS said in the statement: “Winfrey will speak with Meghan, the Duchess of Sussex, in a wide-ranging interview, covering everything from stepping into life as a royal, marriage, motherhood, philanthropic work to how she is handling life under intense public pressure.

It is not known if Harry and Meghan informed the royal household in the UK about their plans to be interviewed but as non-working members of the monarchy they do not have to give notice of their media commitments.