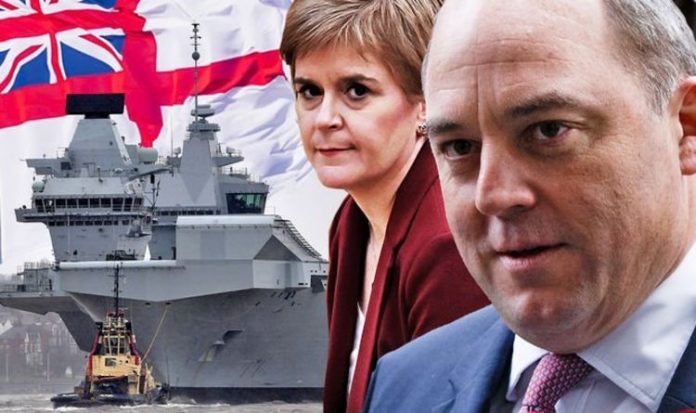 Despite continuing to call for a second Scottish independent referendum, the nationalist party has demanded the Royal Navy place a permanent fleet in Scottish waters.

The party claimed a fleet was needed in the wake of the intelligence and security committee report on Russia, which was released in July.

While submitting their paper, the party said: “Scotland hosts no major surface warships, a fact which means that scrambling the Fleet Ready Escort to Scottish waters takes more than 24 hours, as witness by the (Russian) Kuznetsov carrier group ‘visit’ to the Moray Firth in January 2014.

“The Ministry of Defence should address this anomaly by permanently basing surface warships within Scottish waters.

“Beyond the financial cost, the opportunity cost of Trident renewal is a heavy burden for the rest of the formed forces to bear.

“Scrapping Trident would allow this money to be better spent on conventional equipment, including ships and aircraft within the Royal Navy.”

However, the Defence Minister Ben Wallace has lashed out at the party claiming they have both “rejected Nato” membership over the years.

Mr Wallace said: “The SNP’s plans for defence are delusional.

“Over the years the SNP has firstly rejected Nato membership, and then more lately decided that they would want to join after all – a view that is incoherent with their views on the deterrent and the fact that Nato is a nuclear alliance.

“Article 5 of the Nato treaty says that an attack on one member is an attack on all – collective state security doesn’t have room for the things that the SNP likes and dislikes.

“Or when the nationalists unexpectedly change their minds. Again.

“The SNP’s plans for HM Naval Base Clyde – potentially basing a few Scottish surface ships there – show a complete lack of understanding of the complex work that goes on there to deliver our independent nuclear deterrent capability.

“The thousands of advanced nuclear and engineering posts, the hundreds of programme planners and technicians managing the repair and maintenance programme, as well as the highly-trained military and civilian security force, would simply not be required in such numbers just to support a few Scottish surface ships.”

A Scottish Tories spokesman, added: “Scotland continues to benefit by being part of the UK-wide defence system.

“The SNP fail to explain how they would replace the 11,000 jobs that are reliant on the base on the Clyde.”

Mr Wallace’s comments come after the Ministry of Defence secured an above inflation rise for their budget.

The green light from Chancellor Rishi Sunak means costly equipment programmes can go ahead as well as no cuts to the military.

Malcolm Chalmers, from the Royal United Services Institute think tank, said: “So much of what the MoD does, particularly on procurement, relies on being able to write multi-year contracts with suppliers.

“You can’t plan properly if you don’t have certainty of funding.”

The settlement is expected to last four years but the exact inflation figure is believed to be subject to last-minute negotiations.

The MoD’s budge for 2020-21 is £41.5billion but in their election manifesto, the Conservative party pledged to lift spending by 0.5 percent each year during parliament.

This promise came before the COVID-19 pandemic.