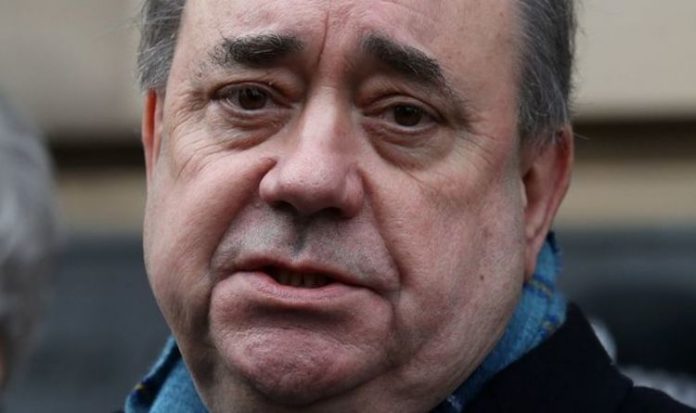 Mr Salmond made a submission on the ministerial code to the Committee on the Scottish Government Handling of Harassment Complaints. But committee members concluded they would not publish due to legal concerns over the identity of complainers in Mr Salmond’s criminal trial last year, where he was cleared of all 13 charges at the High Court in Edinburgh.

Former BBC political presenter Mr Neil said the situation would be “funny if it wasn’t democracy at stake”.

“SNP’s Maureen Watt proposes matter be referred to higher authority. Then votes against own proposal.”

Mr Neil, who is now the chairman of the new television channel GB News, added: “Funny if it wasn’t democracy at stake.”

A Scottish Parliament spokeswoman said: “The Committee considered the detail of Lady Dorrian’s ruling and its impact on the Committee’s decision not to publish Mr Salmond’s evidence on the ministerial code.

“The majority of the Committee is clear that the judgment has no impact on its previous decision and understanding of its legal obligations and its decision on the publication of the submission from the former first minister on the ministerial code.

“The scope of the order has not changed.

“However, the committee is keenly aware that publication is for the Scottish Parliamentary Corporate Body and has tonight agreed to refer this to the SPCB for a decision on its publication.”

The spokeswoman added that the committee had invited Mr Salmond to give evidence next week.

She said: “The committee is pleased to hear that Mr Salmond is willing to give evidence next Wednesday.

“He can, as a minimum, give evidence on all of his published submissions and records. As such, the committee plans to write to him tomorrow to invite him to attend next Wednesday.”

The cross-party harassment committee is investigating the Scottish Government’s flawed probe into unproven allegations of misconduct made against Mr Salmond by two civil servants.

He had the exercise set aside in January 2019, with a judicial review declaring it “unlawful” and “tainted by bias”.

The Scottish Government’s handling of the affair is believed to have cost £500,000.