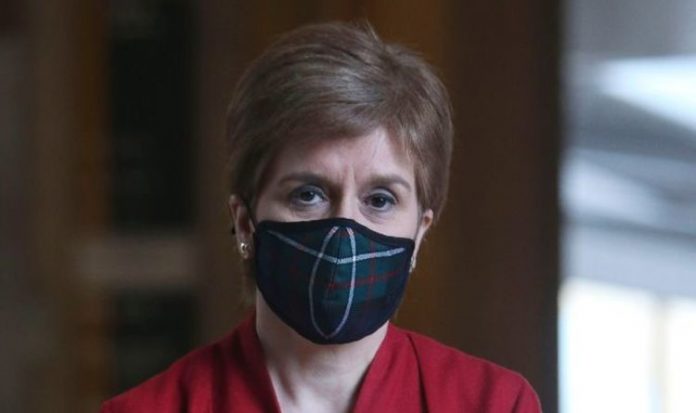 Bute House has attracted the ire of woke warriors because Caribbean sugar plantation owner John Innes Crawford lived there in the 1790s. This makes it unfit to bear its current name, according to Edinburgh city council’s Slavery and Colonialism Legacy Review which was created to “rectify the glorification of slavery”.

The building had previously been linked to Spanish dictator General Franco because of “credible evidence” that the 4th Marquess of Bute – who the building is named after – donated him money during the country’s civil war.

After Scottish Labour endorsed the review, it urged Ms Sturgeon and her party to “make public their commitment” to measures for the 18th-century townhouse.

One of its chief targets is a statue of celebrated Scottish poet Robert Burns because he once “accepted a job working on a Jamaican plantation in a role he described as a ‘Negro driver’.”

David Hume, one of western civilisation’s most influential philosophers, has already had a tower in the city named after him reanointed, 40 George Square.

It came after an outcry because of comments on race he made in the 18th century.

Scottish Conservative MSP Miles Briggs said that while it is “important to be aware of the legacy of Scotland’s involvement in the slave trade” he would not “advocate taking disproportionate action”.

A final review by the Edinburgh group, appointed by the city’s Labour-SNP coalition council, will be submitted in December.

Despite not commenting on Bute House, Ms Sturgeon did speak in the aftermath of the toppling of Edward Colston’s statue in Bristol in June last year.

Speaking at the time, she said: “I do think we should have a long, hard look – or perhaps not that long a look – but a hard look at this as a country.

“And the question I would start with is why do we want to continue to have statues and celebrations, and street names of people who profited in and traded in abject human misery?

“I think there is a discussion beyond that about what we do with them.”

Ms Sturgeon, currently mired in allegations she abused her office in trying to sink predecessor Alex Salmond, added that while she has sympathy for the effort to rename “all” streets she does not favour brushing “under the carpet the history”.

She added: “Certainly though we shouldn’t have statues of people who’ve profited from the slave trade without at the very least a way of making the public know who these people were and what their business was.

“So this is a big debate and long overdue debate and yes, I think there is a role for the Scottish Government to lead that discussion which we will certainly seek to do.”