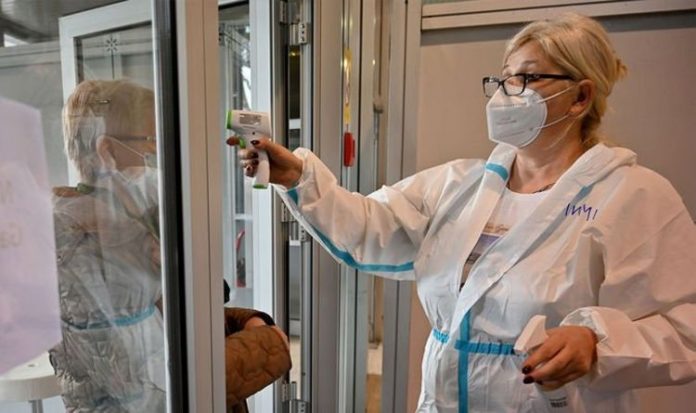 Authorities fear the mutant strain may be more resistant to existing Covid-19 vaccines and are trying desperately to control the outbreaks. After cases were confirmed in Worcestershire, the local council launched surge testing for the WR3 and WR9 postcodes.

They have urged everyone over the age of 18 living in these areas, regardless of whether they feel ill, to get a test.

Door-to-door testing is currently underway in a number of towns including Liverpool, Walsall, Bristol, London and Woking.

In total, authorities have found more than 40 cases of the South African coronavirus variant across the UK.

Border controls are also being toughened in response with those arriving from ‘safe’ countries being required to take the PCR test during their 10-day compulsory home quarantine.

Door to door testing is being carried out for exposed areas (Image: GETTY)

However, the Government’s scientific advisory body SAGE has warned only compulsory hotel quarantine for all arrivals could “come close” to preventing new Covid strains entering the country.

Those arriving from at-risk countries are required to quarantine for ten days in a hotel when they reach the UK, with the traveller footing the bill.

For Worcestershire, a mobile testing unit is operating by the Fernhill Heath White Hart put, with a drive-through testing facility due to open shortly.

Authorities also plan to launch door-to-door testing as they have in other areas where the new variants have been discovered.

READ MORE: Furlough rules: Can you be furloughed while self-isolating?

Those living in the WR3 and WR9 postcodes are urged to get tested (Image: GETTY)

Worcestershire County Council said: “Working in partnership with NHS Test and Trace, every person over the age of 18, living in the WR3 postcode and some WR9 postcodes, is strongly encouraged to take a Covid-19 test this week, even if they are not showing symptoms.”

Speaking to the Mail, Dr Kathryn Cobain, Worcestershire’s director of public health, commented: “I urge everyone offered a test to take it up to help us to monitor the virus in our communities and to help suppress and control the spread of this variant.”

However, scientists fear the new variant may have already spread widely thought Britain with only a small proportion of cases being detected.

The South African variant, called B.1.351, carries a mutation similar to that seen with the Kent variant making it more transmissible.

The UK has vaccinated more than 10 million people (Image: GETTY)

Over 100,000 people have died in Britain after testing positive for coronavirus (Image: GETTY)

Scientists also fear existing vaccines will be less able to defeat it with manufacturers urgently working on corrections.

The first cases of the South African variant were detected on December 23 in London and north-west England.

A day later Britain imposed a travel ban on South Africa, which has now been extended to nine other African countries.

However, on January 21 SAGE warned: “No intervention, other than a complete, pre-emptive closure of borders, or the mandatory quarantine of all visitors upon arrival in designated facilities, irrespective of testing history, can get close to fully preventing the importation of cases or new variants.”

The Government is on track to vaccinate the 15 million most vulnerable by mid month (Image: GETTY)

In total Britain has recorded more than 100,000 coronavirus deaths, more than any other European country.

On Friday another 1,014 deaths within 28 days of a positive Covid test were confirmed, along with another 19,114 cases.

Only Israel and the UAE have vaccinated more people per capita than Britain (Image: GETTY)

However, Britain has stormed ahead of other European countries with vaccinations, averaging 430,500 inoculations over the past seven days.

This puts the Government well on track to vaccinate the 15 million most vulnerable Britons by the middle of February.

Per capita, only Israel and the United Arab Emirates have vaccinated a higher proportion of their population than the UK.