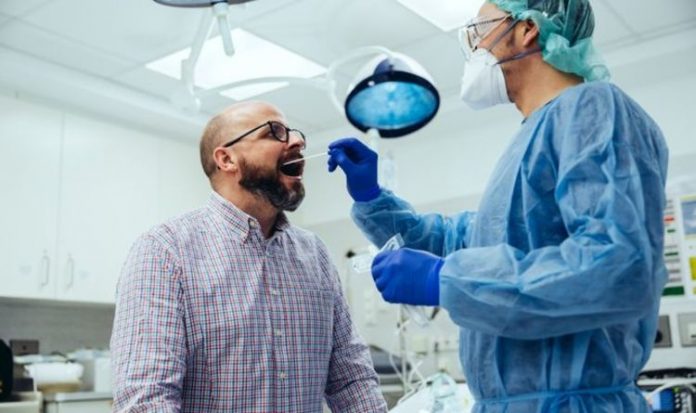 Urgent testing for the South African mutated variant of the virus has begun in parts of England after a number of cases were found with no known links to travel or previous cases. Two Covid variant cases were identified in Surrey, with some previous cases traced back to South Africa. Cases caused by the variant were identified as part of Public Health England’s random checks on testing.

Where is ‘surge testing’ in the UK?

So far, two cases have even found in Surrey, but testing is also expected to take place door-to-door in London, Kent, Hertfordshire and Walsall.

The Surrey Local Resilience Forum (SLRF) along with Public Health England and the Department of Health and Social Care, will carry out “surge testing”.

Surge testing will see residents in the Goldsworth Park and St Johns area of Woking, Surrey, visited and requested to take a PCR test regardless of whether or not they are showing symptoms, while Egham is expected to be added to the list in coming days.

Ruth Hutchinson, director of public health for Surrey, said: “This is a precautionary measure, the more cases of the variant we find, the better chance we have at stopping it from spreading further.”

“We may well be in a situation where we end up having to have an annual coronavirus vaccine much like we do with the flu vaccine.

“But the public want to be reassures that, actually, these technologies are relatively easy to edit and tweak and once we find strains that are predominant, the vaccines can be altered.”

Prime Minister Boris Johnson, speaking on a visit to a vaccine centre in Batley, West Yorkshire, said the Government was “confident” the current vaccinations being rolled out “provide a high degree of immunity and protection against all variants”.

Mr Johnson added: “The interesting and exciting thing about the vaccines we are developing is, increasingly, they’re capable of being adapted to deal with new variants as they arise.”

Reiterating Professor Harnden’s words, Mr Johnson added: “The fact is, we’re going to be living with Covid for a while to come in one way or another.”