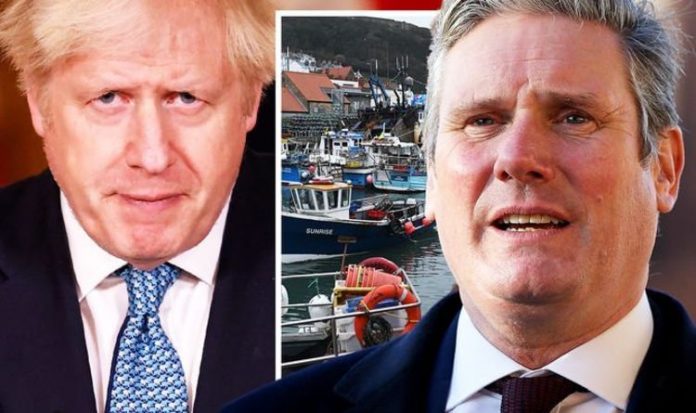 Brexit: ‘Arrangements have been made’ on fishing says Gove

A Brexit agreement could be realised following David Frost’s, the UK’s chief negotiator, counter-offer on fishing access for EU fleets in British waters. Many now believe the deadlock, which has remained for weeks on the topic of fishing, could be resolved just days before Christmas. According to reports, EU sources have suggested that the British demand for a 60 percent reduction in the catch by value in British waters had been reduced to 35 percent.

This is much closer to the 25 percent reduction that the EU’s chief negotiator, Michel Barnier, had said he would be prepared to accept.

French President Emmanuel Macron is thought to be the bloc’s most stubborn customer, as France enjoys a disproportionately large share, around a quarter of its total catch coming from Britain’s fish-rich waters.

Many have now warned Prime Minister Boris Johnson not to give ground over fishing, as it would fly in the face of his 2019 election promises.

Boris Johnson: The PM is reportedly willing to give ground on EU access to UK waters (Image: GETTY)

Further, Professor Steven Fielding, Professor of Political History at the University of Nottingham, told Express.co.uk that Sir Keir Starmer, leader of the Labour Party, will vehemently attack the Government should it bow down to Brussels on fishing.

He explained: “He’s completely free to attack the Government and of course, he will.

“It might appear to be inconsistent, but it would be consistent in the sense that Starmer could say to those affected, ‘You voted for Boris Johnson in 2019, he said he was going to deliver a great deal, an oven ready deal, it was going to be brilliant and great, and look what he’s done to you – he’s screwed you.’

“He could quite legitimately say that, because a deal that Johnson promised, that magical deal, the closer we get to it, if it does include concessions on fishing rights, that’s not what those people voted for.

“Starmer’s entirely justified in saying Johnson has betrayed you.

“So I don’t see that as causing him trouble.

“It is, however, ironic that somebody who supported a second referendum to then attack Johnson in a slightly different position, but as opposition leader, he’s got that flexibility.”

READ  Nick Ferrari erupts as he lists No10's U-turns and asks 'how can we trust you?' | UK | News (Reports)

The independent group of pro-Brexit fishermen demanded that no leeway be given to the EU in the battle to maintain its rights in British waters.

The group said in May: “Britain holds the whip hand, EU consumers need/are dependent on fish caught in British waters.

Fishing access: A crisis over fishing access is currently playing out as the EU refuses to budge (Image: GETTY)

Emmanuel Macron: The French President is one of the EU’s hardest customers over fishing access (Image: GETTY)

“We must not back down from being achingly close to righting the wrong inflicted upon fishing by [former Prime Minister] Ted Heath and regaining our greatest natural resource to exorcise an injustice and rejuvenate British coastal communities with a £6 and £8bn industry.”

Meanwhile, Mr Johnson has ruled out extending the deadline for the transition period.

He added that the UK would “cope with any difficulties” it encounters going forward.

Brexit latest news: Starmer has flip-flopped in his Brexit rhetoric over the years (Image: Express Newspapers)

Nine days remain for the UK and EU to reach and ratify any agreement.

The sticking points remained over fishing access to UK waters and a so-called “level-playing field”.

Mr Johnson has accepted a five-year phase-in period for the new arrangements, with a compromise also likely on the application of tariffs or export bans on goods where fishing access changes after the phase-in period.

Appearing to refuse to acknowledge the UK’s move to reconcile, he instead focused on Britain committing to a level-playing field.

He said: “There have been successive proposals from the UK, sometimes on fishing, that don’t respond to European priorities and demands.

“Difficulties remain, in the fishing sector, but not only, so it would be an error of judgment and unacceptable stigmatisation to say that a few countries or a few sectors are blocking.”

If the UK and EU fail to reach any agreement the two will trade on WTO terms.