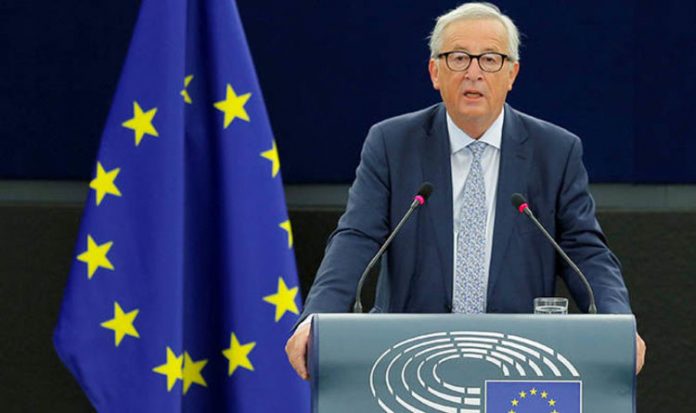 President Jean-Claude Juncker delivered his speech to the European Parliament in Strasbourg on Wednesday.

In this fourth annual speech, Mr Juncker sets out the bloc’s agenda for the coming 12 months, which will largely be dominated by the UK’s withdrawal.

Today’s speech focused on the topics of Brexit, trade, law, past conflict, migration and the EU-Africa strategy.

“We respect the British decision to leave our union.”

“But we also ask the British government to understand that someone who leaves the union cannot be in the same privileged position as a member state.”

“If you leave the Union, you are of course no longer part of our single market, and certainly not only in the parts of it you choose.”

“The European Commission, this European Parliament and all member states will always show loyalty and solidarity with Ireland when it comes to the Irish border.”

“This is why we want to find solutions that prevent a hard border in Northern Ireland.”

“After the 29th of March 2019, the UK will never be an ordinary third country for us. UK will always be a very close neighbour and partner.”

“Michel Barnier stands ready to work day and night to reach a deal… It will not be the Commission that will stand in the way.”

“The Commission will not stand by when the rule of law is attacked.”

“Article 7 (which allows the EU to suspend certain rights from a member state) must be applied whenever the rule of law is threatened.”

“Judgements from the Court of Justice must be respected and implemented. The EU is a community of law and respecting the rule of law and abiding by court decisions are not an option but obligation.”

“In 1914 (the outbreak of World War One), it caught the continent off guard. It was a sunny calm optimistic year in 1913”

“Let us show more respect to the European Union. Let us not sully it’s image. Let us defend our way of life, our way of being. Let’s embrace the kind of patriotism that is not directed against others, and let us decry kneejerk national which attacks others and seeks scape goats rather than looking for solutions that allow us to co-exist better.”

“When we are united we are a force to be reckoned with, something you cannot avoid.”

“Some in Europe are happy with the agreement I reached with President Trump. Some were surprised.”

“Whenever Europe speaks as one, we can impose our position on others.”

“Member states don’t yet have the right proportion between responsibility for their own sovereignty and the necessary solidarity amongst themselves.”

“This solidarity must be provided by member states if they want to retain the Schengen area without internal borders. I am and remain against internal borders. Where they now exist, they must be removed. If they remain, they should be an unacceptable backwards step in Europe.”

“I call on the Austrian Council Presidency to make decisive steps so that we have proper solutions for a balanced reform of the asylum system.”

“We can’t be talking every time about ad-hoc solutions for the people on board. Ad-hoc solutions are not adequate, we need more solidarity and it must be organised.”

“We want to build a new partnership with Africa.”

“Today we are proposing a new alliance between Europe and Africa, an alliance for investment and sustainable jobs.”

“It would create up to 10 million jobs in Africa in five years. We want to create a framework that brings new investment to Africa.”