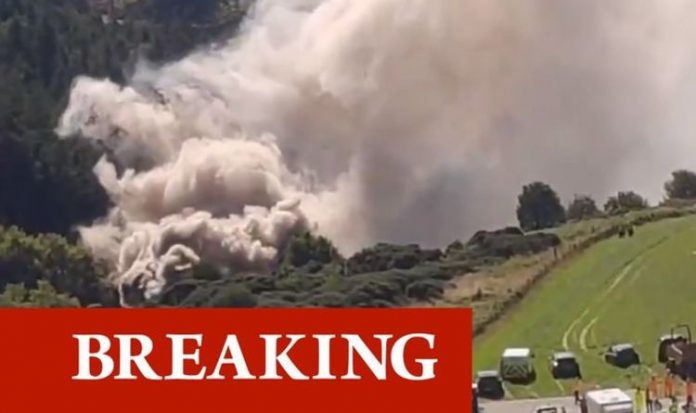 A train crash near Stonehave, Aberdeen was reported to local police at approximately 9.45 AM on Wednesday. Footage of the derailment has emerged on social media, showing a billowing black cloud of smoke engulfing the Aberdeenshire hills. At least seven ambulances rushed to the scene to treat potential injuries, and police vans were pictured metres away from the accident site.

A spokesman for Police Scotland said: “A report was received of a train having derailed near Stonehaven at around 9.45am on Wednesday August 12.

“Emergency services are in attendance and the incident is ongoing.”]

The British Transport Police wrote on Twitter: “We’re currently responding to an incident on the line in Stonehaven, Aberdeenshire, where a train has derailed.

“Officers were called to the scene at 9.43am and remain there alongside paramedics and the fire brigade.

“All further updates will be shared here.”

First Minister Nicola Sturgeon wrote on Twitter: “This is an extremely serious incident.

“I’ve had an initial report from Network Rail and the emergency services and am being kept updated. All my thoughts are with those involved.”