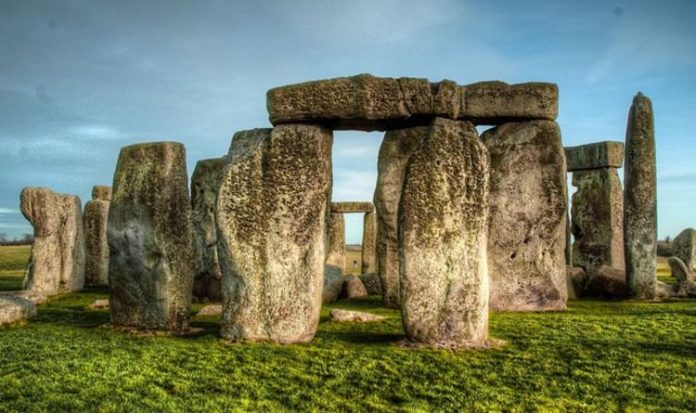 The ancient monument found in the fields of Wiltshire dates back more than 5,000 years and continues to baffle researchers. Last year a team of experts discovered a ring of shafts near Stonehenge that form what is believed to be the largest prehistoric monument ever discovered in Britain. Tests carried out on the pits suggested they were dug by our Neolithic ancestors and archaeologists believe they may have served as a boundary to the sacred area.

Expert Dr Vincent Gaffney revealed how it was made possible during History Hit’s ‘A new discovery at Stonehenge’.

He said “When ideas about Stonehenge were starting to rumble away in my brain, the technology wasn’t up to it.

“Geophysics was one or two people walking across a field with a machine that went ‘ping’.

“That was never going to be good enough to see the whole landscape.

“Once you could have motorised vehicles, multiple sensors, GPS guidance – suddenly the empty landscape started filling in with complete new sites.”

Dr Gaffney detailed how the discovery last year is just one in a number of breakthroughs that have been made in the area.

He added: “Sometimes – and this is what’s happened at Durrington – we’ve got so much data that we’ve not only got new things, but we’re beginning to join the dots over very large areas to produce a single structure that is absolutely massive.

“It’s at a scale that is unprecedented. Massive pits, 20 metres across and at least five metres deep.

“Things started to ping up in our maps once we got the vast data, we now have about 18 square kilometres of the landscape around Stonehenge surveyed.

“It was only when we saw that and mapped them with our own data that we realised there were two massive arcs creating a circle of features.”

Last year experts also made a breakthrough in understanding the monument’s history.

The team of researchers published a study suggesting the ancestors of the builders of the ancient monument travelled west across the Mediterranean before reaching Britain around 4000 BC.

They compared Neolithic human DNA found across Britain with that of people alive at the same time in Europe.

According to their results, the Neolithic inhabitants were descended from Anatolia (modern-day Turkey) and moved to Iberia before heading north.