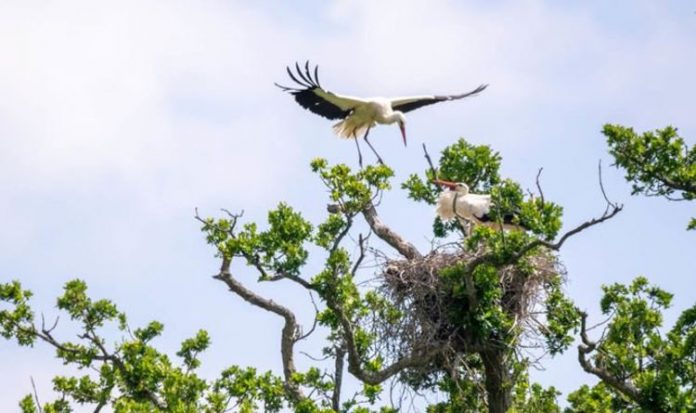 She looked at the same time impossibly big and completely natural. It was hard to believe my eyes, and yet what I was looking at seemed utterly ordinary. For here was a family of beavers, living their free and wild lives in Britain on the confusingly named River Otter in Devon. Beavers were once common across Britain, and were great shapers of the British countryside. But they were hunted to extinction 500 years ago, for their fur and also for a substance called castoreum, thought to have medicinal value.

Now they are back. No one is quite sure how the Devon beavers got there, or if they are, they aren’t saying.

They escaped from somewhere, or they were illegally released. At first, the plan was to kill them off, but when it was established that they had been living free for some years without anyone noticing, there was a rethink.

This year Defra announced that they could stay: despite some opposition, beavers are back in England.

They have been back in Scotland a while longer: there was an official release at Knapdale in 2009 and another unofficial release on the River Tay: both populations are increasing.

Many landowners are keen to have “trial” populations of beavers on their land: that is to say, managed and enclosed, but thriving in the landscape. They create wild habitat for many species, and by making wetlands they also play a significant role in flood prevention. Now it’s widely accepted that beavers are a good thing.

This is part of a trend of reintroduction of lost and nearly-lost species. The species chosen tend to be large and spectacular: sexy beasts, headline grabbers.

And they often divide the crowd: some people very much in favour, others furiously antagonistic.

White-tailed eagles went extinct in Britain in the 19th century, shot in the course of the great Victorian persecution of all birds of prey. They are huge, with a wingspan getting on for 8ft – birds that darken the sky and thrill the soul.

They were introduced on the island of Rum in the 1970s, and have since expanded their range to become Scottish stars.

The nearby island of Mull has a booming tourist industry based on eagles; Mull offers two species of eagle and two locally-distilled single malt whiskies.

There have since been further releases of white-tailed eagles on the Isle of Wight. But plans to release them in Suffolk were shelved indefinitely after a furious campaign by local farmers – some of whom maintained the eagles would carry off their pigs. No one is wholly rational about reintroductions.

A pair of white storks tend their nest near Horsham (Image: AFP)

I don’t suppose for a second that the release of wild boars in England would have got past public objections.

They are imposing beasts. A big male can weigh 23st, they have formidable tusks and they’re pretty swift. They can be aggressive when around their young. This animal is dangerous: it defends itself when attacked.

But in the 1990s there was a restaurant craze for wild boar meat. The animals the meat came from were farmed, but they were at best semi-domesticated – and the inevitable happened.

They are strong animals, and they dig hard with their noses. It’s difficult and expensive to build a boar-proof enclosure. So a number got out, and no doubt a good few more were released when they became inconvenient or uneconomic.

As a result, there are wild populations in many parts of the country, most notably the Forest of Dean in Gloucestershire. They’re not universally popular, but we have reached a stage when it would be difficult and very expensive to get rid of them.

The release of some species does manage to win universal approval. The large blue butterfly went extinct in this country in the 1970s.

The story of the way these butterflies were brought back is one of scientific heroism: it required profound research into the way they live. They turned out to be totally dependent on their relationship with a single species of ant – so if you want large blue butterflies, you must first look after your ants.

This has been done, and there are now good populations of large blues in a dozen or so sites in the West Country.

Haven’t heard a word spoken against the reintroduction of cranes either: impossibly graceful birds which stand 4ft high and dance like ballerinas.

They went extinct in Britain about 500 years ago, perhaps because they formed part of too many medieval banquets, but they came back to the Broads spontaneously in 1979, and have been spreading from there ever since – very, very slowly.

So a project was formed to move them back into the equally suitable habitats of the Somerset Levels. It was a large-scale and expensive process, and there are now free living cranes back in the lovely wet landscape of the Levels.

Storks in Britain went extinct about 500 years ago (Image: Getty)

Perhaps the most obvious introduction has been the red kites: the angular, fork-tailed birds of prey you can see if you travel on the M40.

They are now almost ridiculously common in the Chilterns, where the first birds were released in the 1990s: birds that were more or less extinct in England are now seen even in well-populated areas. They are carrion feeders: road-killed pheasants have helped them to prosper.

This year the weeks of lockdown were cheered by the news that white storks had nested in Britain for the first time in 600 years. They were reintroduced as part of the excellent re-wilding project at Knepp Castle in Sussex.

This is a classic sexy-animal project: but it would take a heart of stone to wish them away again – and if any pair of storks wishes to build a cartwheel nest on my chimney, they are heartily welcome.

What next? The unexpected answer is European bison.

These are seriously imposing creatures, and can weigh up to a ton. The plan is to bring an enclosed population of one male and three females to Blean Woods in Kent in 2022.

European bisons are to be re-introduced in Kent in 2022 (Image: AFP)

The species went extinct in the wild not just in this country but globally; the last one was shot in 1927. But there were 60 left in zoos and from these, free-roaming populations have been established in many countries, including Germany, Switzerland, Poland, Belarus and Lithuania.

It will be fascinating to see what effect these animals have on the ecology of the Kentish woodland.

They will, of course, have no natural predators to contend with, but then, that’s true of every British mammal above the size of a spaniel.

Our deer live in the lap of luxury, with no need ever to break into a run. But suggest that what Britain needs is a few large predators and you will find opposition, even if the suggested predators were once good British species.

The lynx is the favourite candidate for re-wilding enthusiasts.

They lived here once and there is little doubt that if they were released in wild parts of the country – Kielder Forest has been suggested – they would settle down pretty well, eating rabbits and small deer, and no one but field naturalists would notice they were there.

The bison went extinct in the wild globally (Image: Getty)

There are organisations pressing Defra for a licence for such a project, but so far they have met with refusal.

Recently I was in the Highlands of Scotland, looking at an excellent re-forestation project: the owner of Alladale Wilderness Reserve, Paul Lister, had planted more than 800,000 native trees in these fine hills.

It’s a sound conservation project as it stands, but Lister has an ambition still further, of the lupine variety.

He is convinced that a population of wolves would do well here. They would be enclosed by the same sort of game fences they use in private game ranches in South Africa.

So far he has won little more than a reputation as a visionary or madmen; you must take your pick. There are wild wolf populations across Europe. They keep away from humans, and yet they are a powerful tourist draw. I would love to set eyes on a wild wolf.

Wolves were reintroduced to Yellowstone National Park in the United States and have had a powerful and positive effect on the ecology of the place.

It’s easy to put together a sound argument for the reintroduction of wolves to the Scottish Highlands.

It is, however, even easier to scare up an emotional opposition. And besides, there are other things perhaps more deserving of the few quid we spare for wildlife conservation.

We have lost 40 million birds since 1970. We fancy ourselves a nation of nature-lovers but we live in one of the most nature-deprived countries on Earth.

We need to manage our countryside better: and that is where the best re-wilding must begin.

For free UK delivery, call Express Bookshop on 01872 562310 or order via www.expressbookshop.co.uk