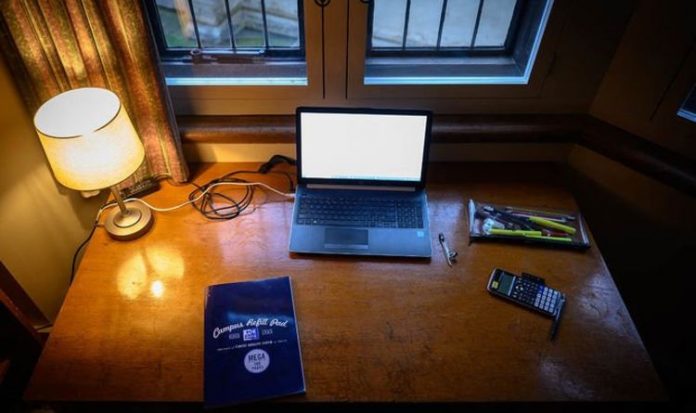 Students are fed up paying thousands for rooms they cannot use (Image: Getty)

Thousands of students signed contracts for their digs believing lessons would take place on campus – but then moved home when teaching shifted online. Many students in university-run halls have been offered refunds and discounts. But some in private rented houses have been threatened with legal action if they fail to pay. The Daily Express is backing the pleas of desperate students asking to be better treated through the pandemic with our Fair Deal For Students crusade.

They claim the company has bombarded them with calls, emails and letters demanding payment.

They were reportedly told they could cancel the one-year contract under very strict conditions.

But lockdown and the cancellation of in-person teaching was not being treated as exceptional circumstances, it was said.

One student, who did not want to be named, said he moved into the Portland Green halls last year and stayed for 14 days before in-person teaching was halted and he moved home.

He said he was withholding more than £2,000 from a private accommodation firm, who have reportedly threatened to call his guarantor if he does not pay up.

The student, in his 20s, said: “I’m more than happy to pay for when I was there, which I have, but I cannot justify paying over £2,000 for somewhere I haven’t clicked a light switch on.

“I get we’ve signed a contract for that place until June but we weren’t to know this [online learning] was going to happen. It’s been quite stressful as well knowing that they’re going to try and threaten legal action.”

Swansea University students are threatening to withhold more than £120,000 in rent for rooms they have been unable to use.

The university has pledged a reduction between January 4 and February 15 for those living in four halls of residences, but some felt this did not go far enough.

Students are looking to hold a rent strike and are calling for a mass refund.  spokeswoman for the university said: “We are working through the implications of the stay at home advice, which came from the Government after some students had returned.”

Meanwhile, some accommodation offered to students during the pandemic has generated dozens of formal complaints about damp, dirt, smells, noise and vermin, a Freedom of Information request has revealed.

One gripe at the University of Greenwich highlighted the plight of a student who was self-isolating.

Her room was said to be in “a terrible condition” with a broken bed.

The person logging the complaint said: “She is mentally and psychologically exhausted.

“She is not sleeping at all, crying all day long and does not have any support whatsoever, rather the opposite.”

The complainant criticised the university for “the total lack of any support and empathy” shown, and added: “She was treated like some under-human.”

Christopher McGovern, the chairman of the Campaign for Real Education, said: “Too many universities are enticing young people on to second rate courses, fleecing them with exorbitant course fees and then dumping them in third-rate accommodation. This is disgraceful.

“At a time of a pandemic induced mental health crisis, students deserve better than being treated as scum of the earth cash cows while university bosses swan around on bloated salaries and expense accounts.”

The 61 complaints, which were all logged from students from the start of the academic year in September, uncovered details about how the standard of accommodation was affecting their mental health and learning.

The National Union of Students said: “It is unacceptable that students are being charged extortionate rents for substandard accommodation.”

Abodus, which houses 1,500 students in Newcastle alone, declined to comment when the Daily Express contacted them for a response.

A University of Greenwich spokeswoman said: “We’re providing hall fee refunds to students who can’t access their accommodation, giving £1,000 to those struggling in private rentals and offering extensive wellbeing support.”