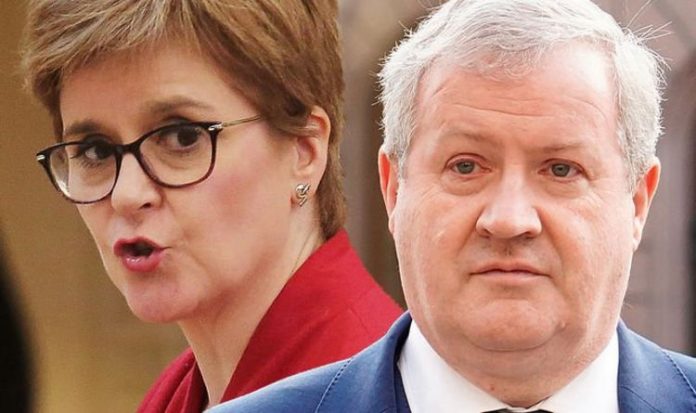 He said: “Every day of the week Nicola Sturgeon has some sort of argument over a power grab.

“The SNP jump out of bed with their grievance machine ready to go every day of the week.

“It’s something which sadly has worked well for them over the past period of time, especially with austerity, with the uncertainty of various referendums.

“It’s very much a ‘stop the world, Scotland wants to get off’ attitude. I don’t personally think there’s any kind of understanding of that in Scotland.”

Mr Briggs continued: “I think most people see the powers the Scottish Parliament has, it’s the most powerful devolved parliament in the world now and if that’s said, what are you doing with that power?

“I think there’s more and more frustration in Scotland about where power lies within Scotland.

“If there’s been any power grab it’s been from SNP ministers and local authorities.

“There’s been so much centralisation in Scotland that the SNP basically give councils orders and then money to do things.”

Drew Hendry, the SNP’s business spokesperson, defended his party’s stance, saying: “There have been so many promises made on things like food standard regulations post-Brexit.

“Those promises were inherent in the devolution settlement.

“These areas are devolved areas of responsibility so anything you take away from that is a power grab. That is a change, a native change, for Scotland.

“So whilst we were part of the EU, we complied with the EU law, but on the understanding that those powers, when they were returned through Brexit, would come to the Scottish Parliament.

“It’s just as clear as day that this is a wanton power grab from Scotland.”