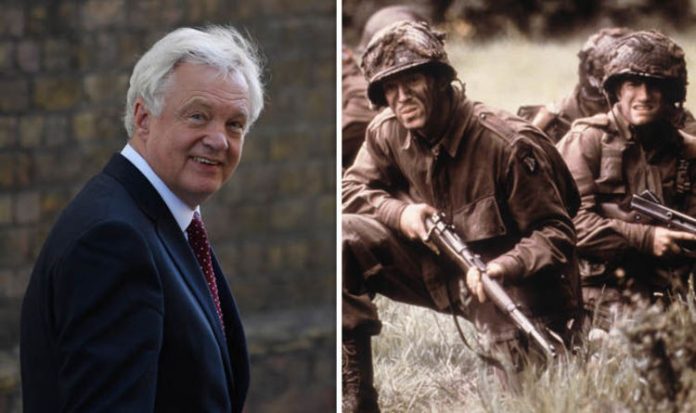 The ex-soldier said the July 6 summit at the Prime Minister’s country retreat reminded him of a scene from Second World War mini-series Band Of Brothers.

“There was a previous Chequers when I battled and won, which is one of the reasons I didn’t resign earlier,” he said. “I had won the battle to diverge and I wanted to see if I could win again. But at this Chequers I was surrounded.

“My favourite parable on that? You remember Band Of Brothers? There’s an episode when they’ve just jumped out of a lorry and they’re going in to Bastogne for the Battle of the Bulge.

“There’s this great long stream of bedraggled defeated soldiers going out and they’re collecting ammunition off them on the way in, saying you don’t need your ammunition, give it to us, and one of the soldiers says to [actor] Damian Lewis, ‘Where are you going?’. And he says, ‘Well we’re going to Bastogne’.

“I thought, we should put that over the door of Dexeu [Department for Exiting the European Union] – ‘We are supposed to be surrounded’.”

Born to a single mother in York in 1948, grammar school boy Mr Davis did not have good enough grades to go to university so he joined the Territorial Army’s 21 SAS (Artists) Regiment in order to earn money to retake his exams. He went on to study molecular and computer science at the University of Warwick.

Mr Davis used another analogy, describing how he spent the day at the British Grand Prix at Silverstone with his daughter before resigning that evening.

“This was Francis Drake going to play bowls before he was going to sink some ships, to use a suitably patriotic analogy… the European Armada,” he said.