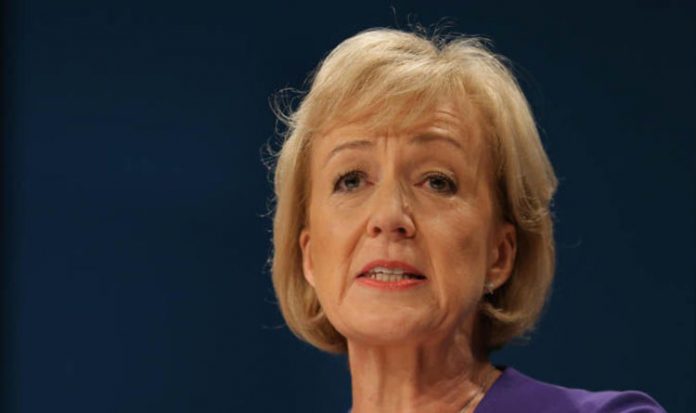 The Commons leader also received abuse suggesting she should consider herself lucky to receive unwanted male attention, she says.

In an interview with the Sunday Express, Mrs Leadsom rounds on critics of controversial new rules which grant anonymity to MPs under investigation.

The move has led to accusations of a “cover up”.

A web page listing MPs currently being investigated by the Parliamentary Commissioner for Standards was removed shortly after the Commons backed the anonymity clause last week.

But the change is part of a package which should mean more investigations and, in the end, more guilty parties named and shamed, Mrs Leadsom says.

At the moment victims are afraid to come forward for fear they will be dragged through the mud, she says. Granting anonymity is designed to protect them and not the perpetrators.

And she hit out at criticism of the policy, saying: “Some of it has been totally missing the point.

“What was very clear from the victims is that the only way they would have confidence in coming forward to the complaints system is if they were not going to be outed themselves as a result.”

She said the cross-party group which drew up the rules heard evidence that victims were not reporting complaints because they “saw what happened” to those who did.

“I had this myself. I never did say anything but someone decided, for reasons best known to themselves, to talk about an experience they knew I had.”

It was reported a complaint was made to No10 about a remark to her by former defence secretary Sir Michael Fallon, when she first became an MP. “And then I had people camped on my doorstep,” she says.

“I had people writing to me, telling me I was a liar, when I had said nothing.

“I had people who took the trouble to write letters explaining to me why a person like myself should feel grateful for attention.

“And there was Twitter trolling, ‘lying bitch’ and so forth.”

Last year Sir Michael was forced to resign amid allegations that, among other things, he had made lewd remarks to Mrs Leadsom.

The scandal was part of a slew of “sexminster” allegations that rocked Westminster.

Another Cabinet minister, Damian Green, was also forced to resign after he admitted he had made a misleading statement after pornography was found on a computer in his Commons office.

The uproar exposed the position of staff at parliament, many of whom had no formal way to complain about harassment.

An official survey of more than 1,300 parliamentary workers earlier this year found 19 per cent had experienced or witnessed sexual harassment.

Under the new rules MPs can be suspended or even face a public vote if they are found guilty of harassment.

They could also find themselves the subject of a formal independent investigation.

Mrs Leadsom says she had spoken to women who had chosen not to make public complaints. “And it is clear to me, talking to those individuals about why they do not come forward, that it is because they will be re-victimised.”

She insists the new rules should see greater numbers of politicians and senior officials at Westminster outed as harassers.

“I don’t want to second guess it, but the remit has expanded so much and I am aware there are many people – unhappy people – who will want to come forward under the new complaints procedure.