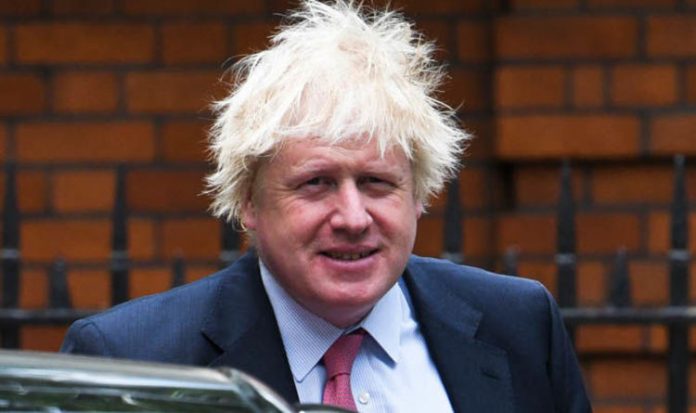 The outrage follows a newspaper article in which Mr Johnson said he did not want the full-face veil and gown donned by some Muslim women to be banned in Britain but the outfit was “ridiculous” and “weird”.

He also said it made its wearers look like letter boxes or bank robbers.

As the outcry grew, including from senior Muslim Tories, Conservative Party chairman Brandon Lewis said he had ordered Mr Johnson to apologise.

The row followed the Prime Minister to Edinburgh, where she was discussing new investment and Brexit.

Asked if Mr Johnson should say sorry, or if he should lose the party whip, Mrs May told reporters:  “I am very clear, and the Government is very clear about  our position on the burka, which is that women should  be able to choose how to dress.

“It’s up to a women how they should dress. It’s not up to other people to tell a woman how to dress.

“But obviously these issues are ones that are openly discussed and it’s right that we have discussion about issues like this.

“But in doing that we all have to be very careful about the language and the terms that we use, and some of the terms that Boris used in describing people’s appearance were, obviously have, offended people.

“So I agree with Brandon Lewis.”

She declined to say if she agreed with those who believe Mr Johnson was trying to drive up support for a new party leadership bid by reaching for “dog whistle” politics appealing to people’s prejudices.

She also refused to say if she thought the comments were Islamophobic – as Scottish First Minister Nicola  Sturgeon said they were.

Earlier, Foreign Office Minister Alistair Burt told the BBC of Mr Johnson’s article: “I would never have made such a comment, I think there is a degree of offence in that, absolutely right.”

But a source close to Mr Johnson  – who is a bookie’s favourite to succeed Mrs May as PM since he quit her Cabinet in protest at Brexit plans – made clear he was in no mood to back down.

“It is ridiculous that these views are being attacked – we must not fall into the trap of shutting down the debate on difficult issues,” said the source.

“We have to call it out. If we fail to speak up for liberal values then we are simply yielding ground to reactionaries and extremists.”

Lady Warsi also echoed calls for an independent inquiry into alleged Islamophobia in the Conservative Party, claiming the party’s Old Etonians were crassly using Muslim women as “a political battleground and it must be condemned by the leadership right from the Prime Minister down.”

The Muslim Council of Britain condemned Mr Johnson’s “intentional usage of the words” as a bid to “pander to the far right”.

Scottish First Minister Ms Sturgeon said: “Boris Johnson’s comments are reprehensible and disgraceful.  He knew what he was doing.”

Mr Johnson was backed by his father, Stanley, who said people were ” whipping up a little mountain out of a molehill on this one.”

And Tory MP Nadine Dorries said the former Foreign Secretary had not gone far enough, adding:  “Any clothing a woman is forced to wear which hides both her beauty and her bruises should be banned and have no place in our liberal, progressive country.”